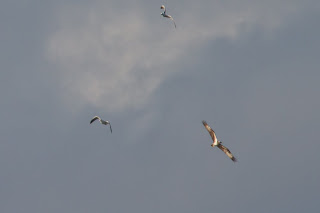 Our second Osprey over this year (Graeme Duncan) 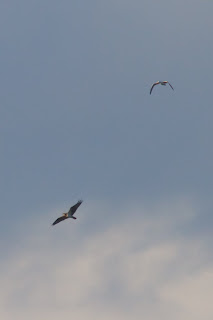 Large Gulls not happy - Osprey over
Tuesday 5th April comments:
Its still all go on the islands, as everything is starting to kick-off. The breeding birds are starting to settle as the urge to nest grows ever stronger, as Puffins have finally returned after a four day absence. Cormorants are now on eggs, whilst Ringed Plover and Oystercatchers have commenced territorial displays.

It wasn't just the breeding birds which have been attracting our attention as yesterday produced our second OSPREY of the year, another being harassed by large Gulls over the inner group - what a year its becoming for large raptors! Sunday brought the biggest influx of migrants including the islands first TREE SPARROW since our long-staying resident of 2007.

As for the team, everyone is settling in and enjoying the great start - long may it continue.
Monday 4th highlights: OSPREY (second of spring) over inner group, Chiffchaff 1

Yahaaaaaaay thats what I like to see an Osprey , they are returning thick and fast now , both birds back at Loch Garten so looks like I might have some chicks to look after come July . Even an egg has been laid at Glaslyn North Wales - so early !!! Sounds like you are all enjoying the Farnes , take care and keep the photos coming they are superb .