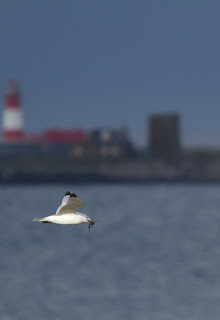 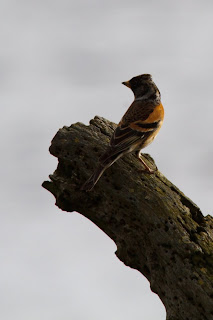 
Tuesday 12th April comments: The season is advancing by the day and today we had another early nester – this time in the form of an Eider. It’s the second earliest ever laying date as a bird sitting on three eggs was discovered on Brownsman. Over 200 pairs are lingering in Farnes waters at this moment, so we’ll soon be invaded be even more. Interestingly the Puffins all disappeared again today, but other seabirds appear to be more settled including the Kittiwakes which are now frantically nest building.

As for the warden team, it’s that time of year again. As long as weather holds, the wardens are heading over to the mainland tomorrow evening to play football against the Seahouses boatmen. It’s a grudge match we don’t like to loose (actually, its really just me who doesn’t like to loose). Anyway the first bragging rights of the season are on offer and we’ll bring you the news and match report on Thursday. Fingers crossed that the first victory of the season heads our way.

Blimey, this is looking like a crazy early season! Lots of long conversations about global warming no doubt...

Good luck with the footy. Decent team this year? Not a scratch on last year, no doubt! Still, give the boat monkeys a thrashing from me.

Keep the picies coming Greeeeme, the raptor pics are lush!

All the best boys and girls

Great pics Graeme - again thank you .
Good luck with the footie make sure you win !!! will await good news on Thursday .