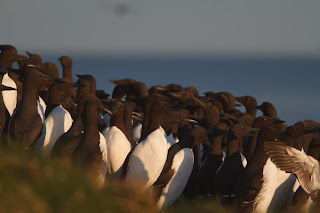 Guillemots all on eggs (Graeme Duncan) 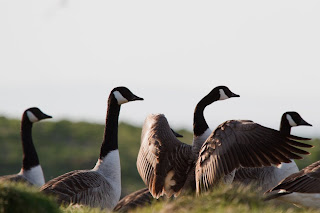 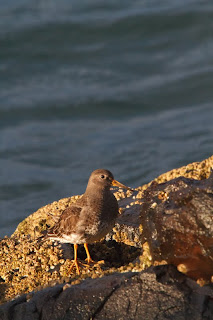 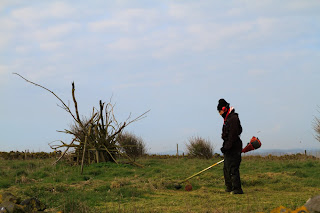 Strimming for the Terns (Graeme Duncan)
Tuesday 19th April comments:
The breeding season continues to gather momentum and each day brings something new. Over the last few days we’ve witnessed an arrival of Arctic Terns whilst huge numbers of displaying Sandwich Terns are now evident over the islands. Although still early, Sandwich Terns have been landing on the main colony of Inner Farne so I suspect an early start for them as well!

On the cliff ledges, Guillemots are well settled, Razorbills are copulating and Shags have been on eggs for three weeks. Elsewhere more and more Eiders inspect nest sites around the islands whilst Puffins are now on eggs! It’s all go and we’ll soon be celebrating a full set of nesting birds, and then the hard work really begins.

On the migrant front, more summer migrants have arrived on the islands including up to thirty Willow Warblers on 15th and our first Tree Pipits on 16th April. Of real note, a Tree Sparrow was on Brownsman on 3rd, two Ospreys over on 2nd and 4th, a Hooded Crow was present on Longstone on 13th, the same day a Greenshank was noted on Knoxes Reef, whilst two different Mediterranean Gulls have been seen in the evening roost.

As for the team, we’ve been working hard, dealing with good numbers of visitors daily whilst preparing the islands for the nesting seabirds. Its early days but we’ve been living on the islands for one month now and as a head warden, the team have had a cracking start and thank-you to each and every one of you – keep it up, you’re doing the Farnes proud.
Posted by Farnes at 19:52