Billy Shiel - a legend in his own time 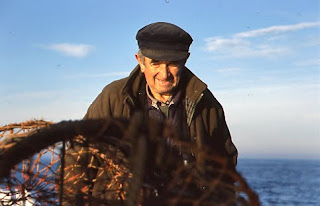 Friday 17th June comments: Today has been a sad day for the Farne Islands as it has lost one of its own. News broke early this morning that Billy Shiel had passed away in the early hours of this morning and everyone involved with the islands will be saddened by the news.

John Walton, Farnes Property Manager, writes: Today marks the end of an era – with the passing of Billy Shiel, aged 83, a chapter of Farnes history closes. For well over sixty years his name was synonymous with the islands and, for over forty of those years, he was the Trust’s ‘official’ boatman.

I met Billy in 1979 when I arrived for my first season on the islands – little did I realise that our friendship, and professional relationship, was to last for 33 years. Billy’s ‘Glad Tidings’ were (and are) our lifeline – taking all the kit out at the beginning of the season, and carting it all back in December, trips to the mainland, water supplies, food supplies and, this may come as a surprise to today’s wardens, post!. Mobile ‘phones – unheard of, laptops/Face-book – not even thought of!

Memories of Billy, and his team, are myriad but one will suffice. It was early December in the winter of ’83 and he and his brother came out in the old fishing boat ‘G.T.3’ to bring the team off. I was on Brownsman Island with my team and Billy, with a storm brewing, was in a real dash to get us off – the odd swear word may have passed his lips! We got to Inner Farne to pick up that team and, just as we were about to cast off, he muttered the immortal words ‘I think we’d better have the lifejackets’. ‘Old Jack’, his brother, turned to me and said ‘ah divvn’t want to worry you son, but it’s ownly the second time in 40 years he’s asked for a lifejacket’! I’ve never seen a sea like it, before or since, but Billy got us safely home – the same wasn’t true of our breakfasts!!
Billy was not, of course, a saint – he could be cantankerous, tetchy, and there were days when you just left him alone. He was human – like all of us. The messages that have been coming in today from wardens spread over forty years are all genuinely grateful for having known the man. I’ve heard some brilliant stories – he left some great memories. Can anyone be a ‘legend in their own lifetime’? If so, then Billy would be a contender.

John Walton (Property Manager), David Steel (Head Warden) the entire Farnes team together with National Trust staff and volunteers extend there condolences to Joyce Shiel and her family.
Posted by Farnes at 18:50

Such sad news David my thoughts are with you all and his family - his name will live on .
You paid a wonderful tribute to him thank you .

A sad day indeed, Billy was as much a part of the Farnes as the birds and seals. Feels like the end of an era.

What a miss he will be..thoughts with all the family.

I am sure the legend of Billy Shiel will live on.

Great words John. He will be missed of that there is no doubt.

Indeed a true legend of the Islands. I certainly have some good memories of Billy from my three years there! He will be missed.

Great tribute to a legend.