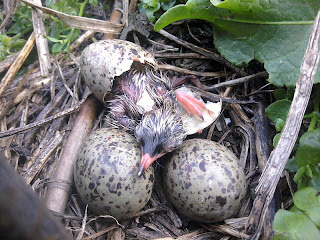 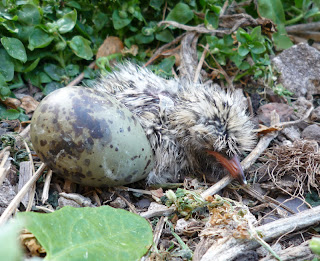 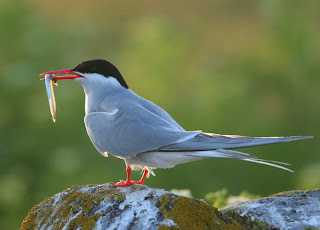 Thursday 9th June comments: Life! In the last few days we’ve had a mass hatching of Arctic Tern chicks across the islands and soon adults will be busy bringing huge quantities of sand-eels for hungry little mouths. It's the same story across the cliff-tops as adults feed hungry youngsters and we even have our first fledglings to report as Guillemot chicks have already started leaving.

On the work front, the wardens continue to count the cliff tops and we reached the half-way stage early this morning, so things progressing well. We'll soon have a clear indication of how the colonies are doing and I'll bring you the news of all the up's and downs from this year's breeding totals.
Although migrants are few and far between at this time of year, we've had three lingering little Gulls including as adult which is entering the Arctic Tern colony on a regular basis and even displaying to us – it’s an impressive site!
Posted by Farnes at 15:09

David HELP > I am planning to come over on 26th July and have just realised no landings on Inner Farne in the morning (on Billy Shiels) I presume that applies to all ??? it is my only opportunity to come over on that Tuesday morning as time is tight , cant go to Staple as the lady I have with me is 84 so will not manage Staple - any ideas ??? so want to come over again this year