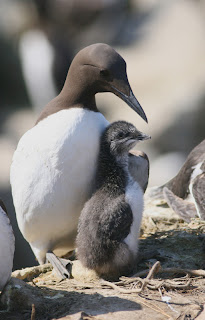 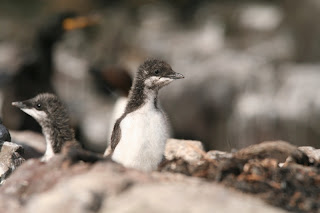 Saturday 11th June comments: I've said it before but I'll say it again....just how quick is the season progressing? On Friday evening we witnessed a true 'Farnes experience' as hundred's of Guiellemots with 'fledged chicks' departed the cliffs for the open sea.

The chicks, only twenty-one days old (or so) are encouraged to jump from the cliff-tops by their parents (usually the father), so they can whisk them away to the safety of Dogger Bank and beyond, where they will grow flight feathers and become independent. The best time to witness this spectacular event is a few hours before dusk and the first real movement of the season occurred yesterday.

Approximately 1,000 'jumplings' departed Staple and Brownsman indicating a very successful breeding season. It'll now be a matter of weeks before the cliff-tops are bare and all 50,000 Guillemots have departed the islands for another season. It'll be a strange (and quieter) place without them but we wish them good luck and hope they return next year to start all over again. Just how quick is this season going.....
Posted by Farnes at 17:52