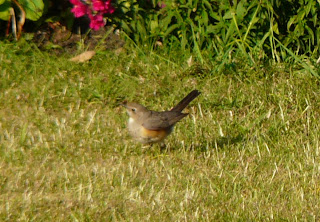 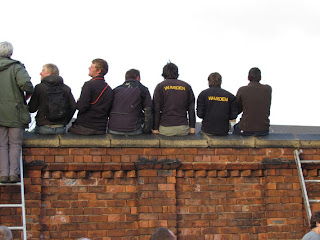 Team on a wall 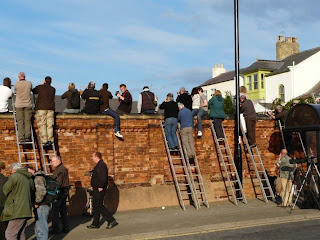 Birding from a ladder... 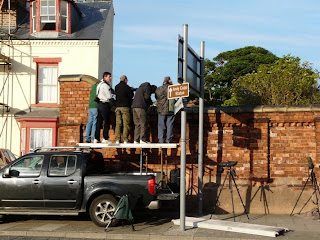 Tuesday 7th June comments: It was no ordinary day on the Farnes yesterday or should I say off it. The day progressed as normal, with a 6am start, a completed cliff-count and then various island work including welcoming lots of visitors. Even the first Arctic Tern chick hatching could not distract from the main event – the Farne Islands tour.

Last night the Farnes were empty. Ten wardens, two cars and several miles later the team arrived in Hartlepool to experience one of the most bizarre twitchers ever. A White-throated Robin, the first ever English record (and only 2nd for UK – a third has been seen on the Isle of Man) was discovered on Hartlepool headland earlier in the day. The keen birders amongst the warden team were keen to go and soon everyone was mainland bound and heading south.

We arrived to be greeted by ladders and scaffolding erect on a van as the bird was showing very well from inside a walled garden. Soon the team were either on the van or up a ladder enjoying fantastic views of this little eastern gem. What a way to see a bird and what a bird! I must comment and say the locals were very friendly, very helpful (thanks for the ladders) and some were even selling sandwich's to my team. Birding, it really is a crazy hobby.

The triumphant team returned to the islands and this morning we were back into the routine, we’ve got birds to count, and plenty of them.
Posted by Farnes at 10:31

And people wonder how twitching gets a bad name?