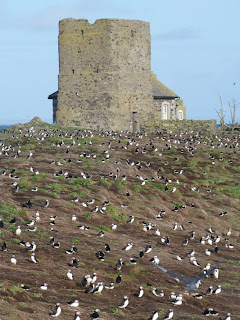 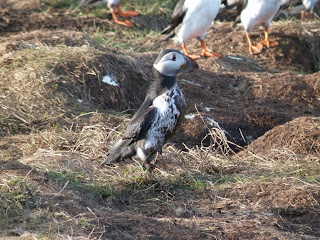 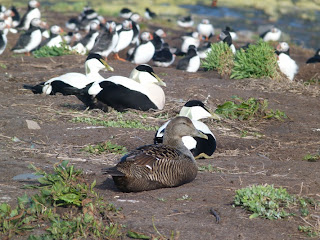 Eiders prospecting and now on eggs 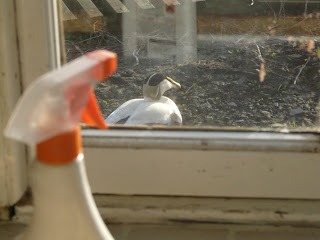 Eiders from the Kitchen window! (Ciaran Hatsell)
Friday 13th April comments: The unsettled start to the season continued as the wind switched to the north overnight preventing visitor boats from sailing (it is Friday the 13th after all). Despite the disappointment, the team got on with various work, from painting toilet cubicles to scrubbing jetties to even a bit of water management - too much water in the pond for the Puffins!

However the big breaking news came in the form of the first eggs of the year for two species. A check of the Puffin colonies on Inner Farne revealed their first eggs (the second earliest on record) whilst an Eider on Brownsman has popped out her first egg. The breeding season now feels like its gathering momentum and it won't be long before the Terns are joining in.

Today brought a big step in the breeding season and hopefully the wind will ease and we'll be able to share it with everyone again soon. Until then, keep reading and fingers crossed for some good weather.
Posted by Farnes at 20:42

lovely pics again and blog thank you - oh all those Puffins so cute . Sounds like it is going to be a busy year

Just like to thank Ranger April for her enthusiastic help and guidance around the island showing us the best spots for photographs on a beautiful sunny day on Thursday 12th April. She turned a good vist into a brilliant visit for us. Thanks April !