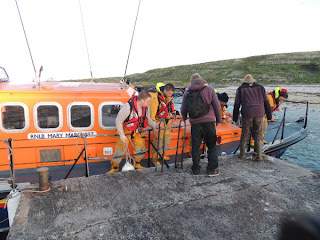 Will awaits his lift (Bex Outram) 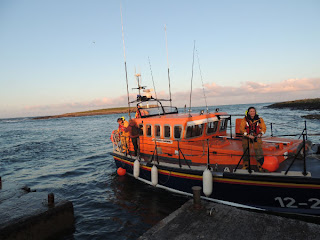 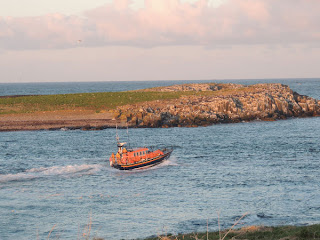 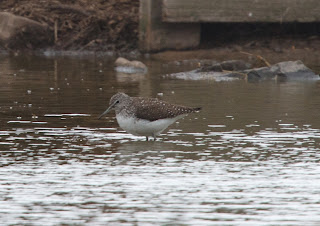 Sunday 29th April comments: Last night resident ranger Will had the misfortune of standing on a rusty nail in the vegetable garden on Inner Farne, which penetrated to the bone (ouch!). Following the incident, the swelling (and pain) intensified and the decision was made to get Will to a local A&E to have it checked out. However that’s not easy when you live on an island.

As northerly winds have prevented visitor boats from sailing, there was no chance of us using our own boats or calling for help from local boatmen. So the boys in yellow were called – the local RNLI lifeboat. Humber coastguard was informed and soon the boat was powering its way through the white horses to rescue ranger Will.

I’m glad to report all ended well, as Will was treated for his injury (we think he was using it as an excuse to get off to have a shower!) and the islands owe a big thank-you to the local coastguards and RNLI. We don’t need them often but when called upon, it’s great to know they’re on hand. Great work and great ending.

Today brought our fifth consecutive day of closure (will this wind ever ease?) and once again the islands experienced low temperatures and yet more rain showers. The seabirds appear just to be getting on with it, although once again focus will be back on the Puffins…not more rain.

On the migrant front the Wryneck remains on Brownsman, at least two Redstarts are still in resident, whilst a Green Sandpiper on Brownsman pond all day was only the tenth spring record in the past thirty years.
Posted by Farnes at 22:37