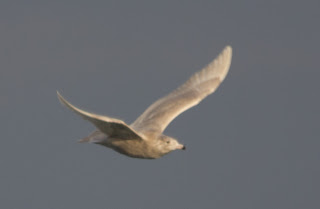 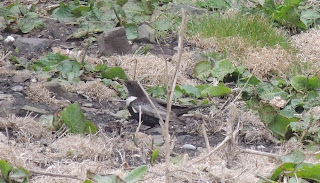 Ring Ouzel - one of three today
Friday 20th April comments: It was a strange day today as bright sunshine gave way to heavy rain showers before returning to glorious sunshine. However one thing didn't change - no visitor boats again. The frustration of the early season continued and although the winds dropped considerably, the large swell prevented boats from sailing. People keep telling me there is always tomorrow...so fingers crossed.

On the bird front, the vast numbers of Robins and common migrants remained from yesterday with the addition of two more male Ring ouzels (these 'upland Blackbirds' are migrating in from Africa) and it's great to have so many in the spring. However the biggest surprise of the day came in the form of a 'white-wing' Gull - a Glaucous Gull in Inner Sound - always top birds to see as they migrate north through the UK (and look so much better than our Gulls).

Apart from the birding, the team got on with lots of strimming (in preparation for our breeding Terns) whilst some staff members got on with the task of opening up Staple Island (scrubbing jetties etc) for that particular islands opening on 1st May. Its all go on the islands, and surely we'll be welcoming visitors back on Saturday? Won't we?
Posted by Farnes at 19:27