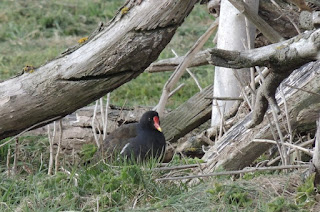 Moorhen in the garden (Bex Outram) 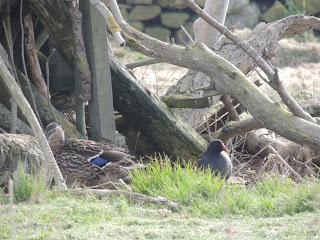 Like a local duckpond; Moorhen and Mallard together (Bex Outram) 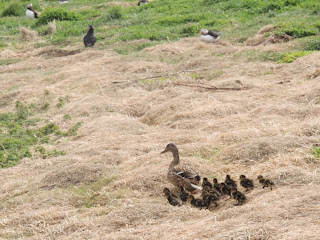 Our first chicks of the year - Mallard with ducklings (Bex Outram)﻿


Monday23rd April comments: An interesting day on the islands as the breeding season continues to gather momentum. However the wind remained in the east, cooling conditions and bringing very few visitors to the islands (it's been a disappointing month).

However it was focus back on the migrants as a Moorhen was discovered wandering around Inner Farne before eventually settling in the vegetable garden to feed. In the 'real ' world, these birds are commonly found along British waterways, ponds and lakes, but on the Farne's it's a different story (what more would you expect!?).

Moorhen's are far from annual, having only occurred in thirteen of the previous twenty years, and the majority of records refer to one per year. The Farnes will always continue to attract unusual birds, and this is just a reminder that we are no ordinary place. Next stop Blue Tit - last seen...1977...
Posted by Farnes at 20:33

MEGA! I'd gladly swap you more moorhens for just on eof your ring ouzels!