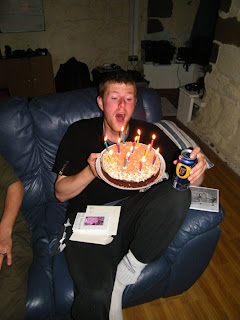 Happy Birthday Ciaran - cake made by Bex and April! 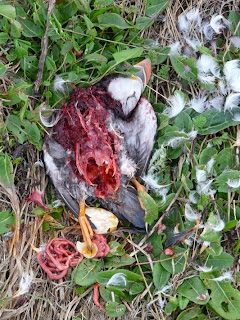 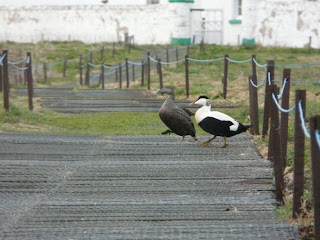 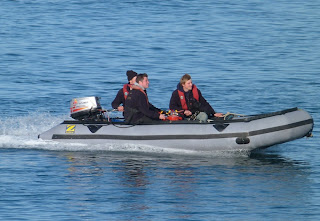 Boys in action - Ciaran, Andy and Will in Zodiac
Wednesday 11th April comments: In complete contrast to yesterday, the wind was light, the sun was out and the clouds were gone. It was a cracking day on the islands, which improved throughout the day and the team, visitors and birds enjoyed a welcome return to calmer conditions. The team were celebrating our second birthday of the season - this time Ciaran enjoying his Birthday on the islands - Happy Birthday mate!

The day began in dramatic fashion, as a Puffin was found dead, having been taken by a Peregrine in the first few hours of the day. Although this is nothing unusual, it was made special by the fact the bird was carrying an egg - the fragmented remains of the egg shell can be seen on the photo - a very unlucky Puffin and a reminder of the harsh realities of nature.

On the breeding bird front, Guillemots have started laying across all the islands - it now won't be long before all our Guillemots are on eggs. Eiders are starting to creep up onto the islands to check out nest sites whilst Kittiwakes have started nest building. Its now all go. On the migrant front, six Manx Shearwaters were noted heading north in one hour seawatching during the evening, whilst a 'White' Wagtail on Brownsman was our first of the year.
Posted by Farnes at 21:23

It's always a little shocking to see a dead animal, but such is life!