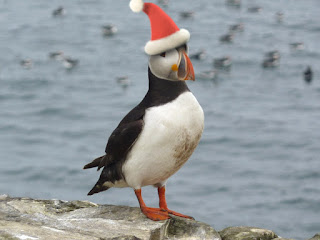 
Best wishes from me and all the Farnes team! Merry Christmas.
Posted by Farnes at 16:23 1 comment:


Saturday 22nd December comments: The season brought a huge test for our breeding seabirds, with the wettest April-July period since records began and some almighty storms pounding the islands throughout the summer. The now legendary ‘Thunder Thursday’ will live long in the memory as Northumberland saw heavy rainfall and a huge thunder storm on 28 June, resulting in widespread flooding and mayhem on roads and rivers. The Farnes were hit hard too. Seabird chicks across the islands felt the sting of the rain and wind and many didn’t make it. Puffin burrows were flooded whilst cliff nesting species were washed off the rock faces. Passerines struggled to find food for their chicks as they starved in their nests.

However, despite the terrible weather, it wasn’t all doom and gloom on the Farnes! The food supply this year was excellent, with birds bringing in plenty of Sand-eels for their expectant young. Puffins were recorded bring in around ten to fifteen fish at a time, meaning the young in burrows that were not flooded grew quickly and managed to fledge. It was a landmark year for Guillemots as they reached their highest ever total at 49,076 individuals, whilst Razorbills also continued to thrive with an increase of thirty pairs on last year’s count.

On the other hand, it was a disastrous year for the Eider, with a huge drop in the population and a terrible breeding season. The first Shelduck chicks were seen around the islands for the first time since 2003, with at least two breeding pairs making the islands home this year.

Terns had a productive season with a concerted monitoring effort resulting in 1,010 Arctic Tern nests being monitored with a productivity of 0.65, around average but quite impressive considering the trials they faced! Sandwich Terns saw a dramatic increase of 422 pairs, sky rocketing from last year. With their come-and-go attitude, who knows how many pairs there will be next year?!

All in all, it was a tough year for seabirds on the Farnes but their resilience and never say die attitude saw them come out on the other side and they (and we) will be back to do it all again in 2013. Bring it on!


Friday 21st December comments: As I continue to wind down 2012, I still have lots to share and I must thank several people for the great season we’ve just had. I’ve already thanked my team for their brilliant work during 2012 and alongside them; I must thank Anne (our archivist) who provides huge support for the islands with her historical knowledge and amazing ability to find obscure Farnes reference material - keep up the good work Anne. I would also like to thank Dr Chris Redfern, our ringing trainer for all the support he provides throughout the year as well as all the National Trust staff who without you, this place would never tick.

My final thanks will be posted on the blog on Monday, but I must end on a bit of sad note. Ranger Andy has reported that his trusty Punto has finally died and is being scrapped today. The Punto has many great memories attached to it for the team, as the vehicle has taken us to rare birds (White-throated Robin was just one of many) as well as football games and so much more. Long live Andy’s Punto – it won’t be forgotten.
Posted by Farnes at 15:26 No comments:

Wednesday 19th December comments: To complete our breeding seabird review, I’ll finish off the season with a species which captivates everyone’s attention; it’s our Puffins. We have over 36,000 pairs of breeding Puffins on the Farne Islands and this year they experienced one of their worst breeding seasons in recent times.

The breeding season kicked off early following a mild winter period as the first Puffin eggs were discovered on 13th April, the earliest laying date since 1993. The first chicks were hatching by 20th May and the first fledgling departed on 27th June. Birds continued to fledge throughout July, with the majority of birds gone by the end of the month. The last record of chicks on the islands involved a pair feeding young on Inner Farne on 16 August but thereafter, they were gone.

However the breeding season was not a great success as record breaking rainfall during the summer months brought huge issues with underground burrows flooded out on a number of occasions. On some islands (with shallow soil caps) the damage was almost catastrophic with an estimated 90% breeding failure on Brownsman alone (representing about 12,000 pairs). During the heavy rainfall, the islands Puffin colonies looked more like an upland peat bog as opposed to a coastal seabird colony. However it wasn’t all bad news, as those islands with deeper soil caps, especially Inner Farne, the colonies were not badly affected and plenty of chicks were raised.


However it’s not all bad news, as Puffins are long living birds (living well into their mid-30’s), so a population can tolerate one bad season, but what is important is that we don’t have a repeat of this weather next year. Fingers crossed.

Speaking of next year, it’s a huge season for the islands Puffins, as its time for the big one… it’s the island Puffin census; the first population count since 2008. What will the results bring is anyone’s guess, but keep on following the blog as 2013 is the year of the Puffin. You heard it here first. Puffin census 2013.
Posted by Farnes at 22:27 No comments:

Monday 17th December comments: Farnes revisited! Following a spell of calm weather, I took the opportunity today to return to the Farne Islands to continue the Grey Seal pup count. Since leaving ten days ago, the islands have remained unattended and it was important to get out to make another check of the colonies.

Although its late for the pupping season, Grey Seals have been known to give birth on the Farnes up until mid-January, so the trip was essential for our data set. A complete colony count of Brownsman and Staple Island along with a few other scattered colonies revealed an impressive 50 new pups had been born since the rangers departure. This brings our autumn pup total to an impressive 1,592 and with another trip planned in the near future, we'll probably see over 1,600 pups born.


Otherwise the islands were quiet with Long-tailed Duck, two Goldeneye and 65 Wigeon being the birding highlights. I'll keep you posted of any future counts, but its been an impressive autumn for the Grey Seals of the Farne Islands.
Posted by Farnes at 17:06 No comments:

Thursday 13th December comments: As we start to process this year's data, compile reports and discuss the management of the Farne Islands, we are starting to get reports from other east coast seabird and seal colonies.

Over the last five years, the east coast of England has witnessed an increase in the Seal pup production as the main colonies have reported year-on-year increases. The pupping season has yet to finish this year (we'll be heading out to the Farnes for an updated count in the near future) but reports suggest another bumper year at the main colonies.

The latest Grey Seal pup counts (so far this autumn) include: Farne Islands 1,542, Donna Nook (Lincolnshire) 1,505 and Blakeney Point (Norfolk) 1,055. There are a few smaller sites scattered across the Norfolk coastline yet to report in, but overall the population is booming.

So why is this occurring? It's a question which will be raised over the forthcoming months and as like anything in conservation, its never straight forward. Major Seal colonies in the north and west of Scotland are reporting no increases with some even reporting slight down-turn in their populations, so the picture is very mixed. However for one thing, the east coast is booming and it'll be interesting to see what the future has in store.
Posted by Farnes at 10:21 1 comment:

﻿﻿﻿﻿﻿﻿﻿﻿﻿﻿﻿﻿﻿﻿﻿﻿﻿﻿﻿﻿﻿
Tuesday 11th December comments: So the dust has settled and the Farnes are empty. The ranger team have returned and everyone has gone their separate ways for the winter. The team travelled far and wide over the weekend and will only now start to enjoy the comforts of home life, with running water and central heating. Enjoy it team, you deserve it.

Therefore my first duty is to thank each and everyone of them for a memorable season. Its been a roller coaster of a journey, with the weather dominating from the hard times (seabirds suffering with the rain) to the high times. From March to December its been a pleasure to work with you all, and thank-you for your fantastic effort. You've worked brilliantly as a team, took on the challenge which is the Farnes and put lashings of effort into the job. Your all a credit to the National Trust, the Farne Islands and me. Thank-you once again, I applaud you all. Go and have a great Christmas, relax and enjoy because in 14 weeks time, you'll be back out their doing it all over again.


Sunday 9th December comments: We made it. We had it all; tension, high drama and a final (unlikely) escape as the Farnes team have departed the islands.


The rangers on the islands had very little sleep on Thursday evening as the wind (as forecast) had increased from the north and when the alarm clocks broke the nightly silence at 6am, it looked as if the team would be marooned until at least the weekend. However we were not to be beaten, as the skill of the boatmen ensured the boat was sailing, despite the rough sea.

So before the sun had even thought about rising, the team were ferrying stuff from the accommodation to the jetty ready for collection (not an easy job when you have to navigate angry Grey Seals in the pitch dark!). However we completed the task and just after 8am, the boat came into view and the Brownsman team were saying goodbye to their island home soon after. Next stop Inner Farne and another job complete.

It’s a huge undertaking the final day as we move everything off the Farnes from personal kit, to generators, engines and even the kitchen sink (almost). Recycling, scrap metal, gas bottles, general rubbish, an old cooker and anything else we have collected over nine months also comes off with us. Its no easy job with a lot of lifting and organising but something this team is very use to.

Eventually, the boat set sail through Inner Sound with a celebrating team and we arrived triumphantly in Seahouses, back on the mainland. Our day wasn’t complete as everything we brought off had a home to go to, but as darkness fell, the tired team settled down for a final evening of celebration.

The evening was as good as ever, which included a spoof awards night and the rest was history (mostly a blurred history). Saturday morning brought several sore heads and heavy hangovers before the team departed the length and breath of the country (every where from Isle of Scilly, to Sheffield and beyond).

It’s been an amazing roller-coaster of a season and over the next two weeks I’ll bring you the highs, lows and everything in between including a round-up of the team and the thank-yous which go with it. Where back on the mainland and planet Farnes is empty, until we return next spring. Long live Planet Farne.
Posted by Farnes at 13:03 1 comment: