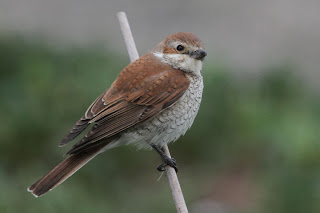 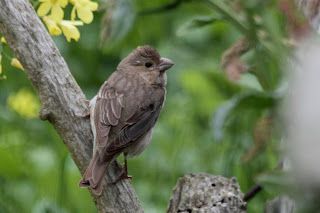 Dropping in to say hello; a Common Rosefinch (Mark Breaks) 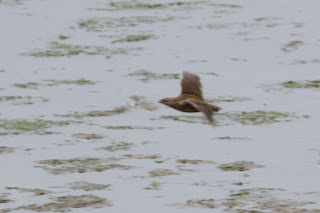 Farnes 20th ever Quail (Mark Breaks)
Wednesday 9th June comments: Today has seen some major changes on the islands. The breeding birds are bracing themselves for something sinister (and I’m not talking about an idiot with a garden cane!) but my old friend... the weather. A low pressure system has developed over the islands bringing brisk north-easterly winds which could bring problems for our breeding seabirds. Its not just a problem for the birds, as the strong winds also prevented boats from sailing today so no visitors and the team will face a few days cut-off from the outside world. However forget our small inconveniences, its the seabirds which we should worry about...
The next few days will make or break our season - will the storm be strong enough to cause the seabirds some serious problems? Will enough rain fall to start flooding Puffin burrows? So many questions, so few answers at this moment, but I'll be pleased to see out the weekend unscathed. Lets hope the weather gods are looking favourably upon us.
However it wasn't all bad news as although the weather brought uncertainty to the breeding seabirds, small numbers of passage migrants arrived looking for food and shelter. The highlights included a stunning female Red-backed Shrike (which devoured one of our Rock Pipit chicks!), a Common Rosefinch (not that common!) and a Quail. However as Inner Farne had claimed the first ever Black Kite the previous week, it was the turn of the mighty Brownsman to bite back – as they claimed all the birds, leaving the Inner Farne team frustrated but 'fired' for tomorrow. I suspect things are about to get interesting.
On a final note - thanks for all the messages of support regarding the Arctic Tern incident - still in disbelief (and shock) at what happened and don't be put off - we welcome thousands of great people, who enjoy the wonders that are the Farne Islands - so keep on supporting us!
Posted by Farnes at 23:18 19 comments: 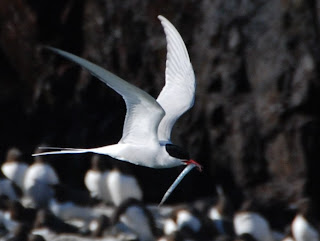 A mighty Arctic Tern
Monday 7th June comments:
Today was a sad day as we lost one of our own – an adult nesting Arctic Tern has gone and isn’t coming back. Over all my years I’ve seen Arctic Terns lost to old age, Peregrine attack, Greater Black-backed Gull mauling and even a Great Skua raid, but I’ve never encountered the loss of one of our birds to a human visitor.

Today, a visitor decided to grab a garden cane (marking an Eider nest) and whack an Arctic Tern out of the sky, damaging its wing beyond repair and killing the bird. The adult, simply defending its nest, was one of many which nest along the pathways on Inner Farne and was sitting on two eggs. Arctic Terns winter in the southern oceans and despite the perils and dangers of such huge migrations on an annual basis, this poor individual was lost to something which should have known better.

15 stone Vs 40 grams – there is only going to be one winner. So thank you ‘visitor’ – please don’t return, as one idiot for the year is enough – your village missed you today. We’re here to protect these birds, not swot them like flies – I hope he feels fully ashamed tonight, but I very much doubt it. The Farne’s will mourn a loss but for anyone visiting in the future – these birds are simply defending their nests and please give them the respect they deserve. Its been a sad day.
Posted by Farnes at 22:41 19 comments: 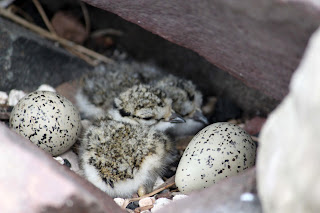 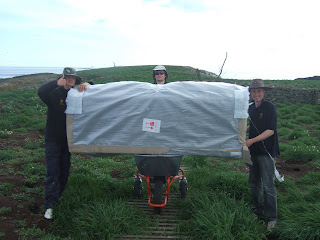 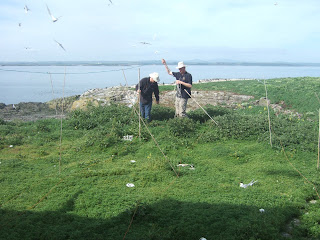 Counting continues (Tom Simon)
Sunday 6th June comments:
Its been a long hard week, with plenty of ups and downs as the Farnes welcomed June and half-term. The week started poorly, with two days of closure due to rough seas followed by four glorious days which resulted in the islands running at almost capacity as visitors arrived in good numbers. Combined with all the usual work alongside the start of the counting of the seabird populations, the wardens have been working hard!
On the seabird front, Sandwich Tern chicks hatched in late May whilst the first Arctic Tern chicks hatched on 4th June. The season appears to be advancing by the minute as already we have said goodbye to our first Guillemot 'jumper' - as birds have already started leaving for the open sea. More and more Puffin chicks hatch daily whilst Kittiwakes are feeding hungry mouths.
As for the warden team, the counting season is upon us and we've been up early each morning counting the huge numbers of seabirds and although its early days, we've got good news as Arctic Terns appear to be up but as feared, Eider numbers have collapsed once again. The exact highs and lows will be revealed over the following few weeks, but we've got plenty more counting before we can give exact numbers.
Behind the scenes, more improvements to the accommodation have taken place, as Brownsman took stock of their new sofa - DFS were slightly confused when I asked them to deliver to the Farne Islands, but they didn't disappoint and where now looking forward to a comfortable season ahead!
Other than that, its been quiet on the migration front and all goes well on the islands...or is it? Stay tuned - the weather is about to turn - could it all end in disaster? Its going to get messy....
Posted by Farnes at 22:34 No comments: 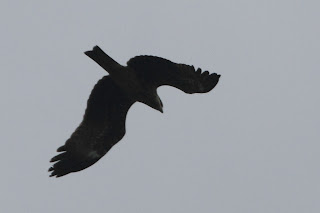 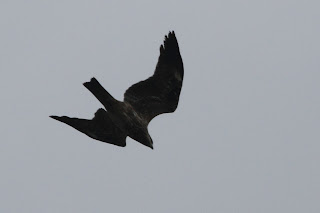 Then suddenly, there it was – a Black Kite, in full glory, flying low over the small stretch of water known locally as the ‘kettle’, and then over the admiring wardens on the jetty. The bird continued to move west, putting everything up in its sight - nothing liked it (apart from the wardens!) as every breeding seabird scattered for miles. However the bird moved on and became a record breaker - the first ever record for the Farne Islands - a brilliant moment - a classic for Farne birders and something we won't forget. The species is a rare visitor to the north-east of England and probably travelled over the from the near continent before tracking north in today's southerly wind. Either way, it was a great bird to record on the Farnes.
Posted by Farnes at 21:37 3 comments: