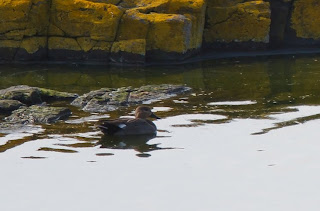 Gadwall - a rare bird on the Farnes (Graeme Duncan)
Wednesday 30th March comments: It’s the build up to the big day – where opening to the public on Friday and we’re ready. We’ve worked hard getting the new interpretation ready, the Chapel polished, the boardwalks up to scratch and the jetties scrubbed. Its time we saw some friendly faces from the mainland. However the wardens have read the script but the birds haven’t – predictably the Auks have disappeared for a few days whilst everything else appears to be scarce apart from the Shags – some are now on three eggs! On the migrant front, a first-summer Iceland Gull roosted on Knoxes Reef whilst three Gadwall lingered around the Kettle – an unusual sight for the Farnes. Sandwich Tern numbers have peaked at 13 in the roost whilst common migrants such as Wheatear and Goldcrest continue to move through.
Posted by Farnes at 22:44 No comments: 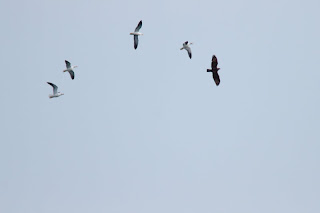 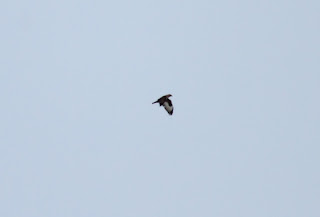 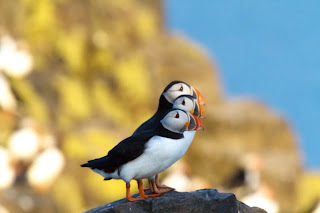 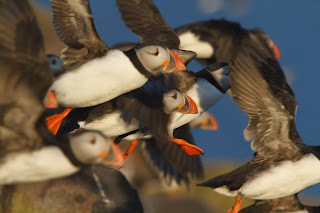 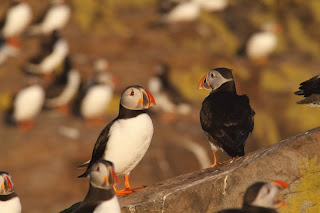 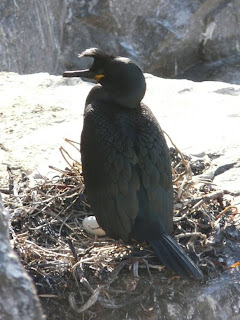 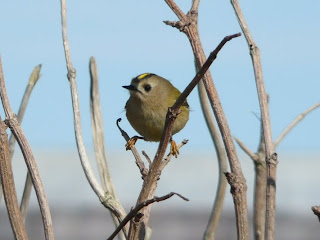 Pinkies on the move 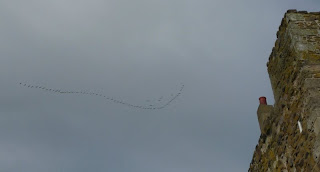 Skein of Pink-footed Geese over the Pele Tower (Ciaran Hatsell) 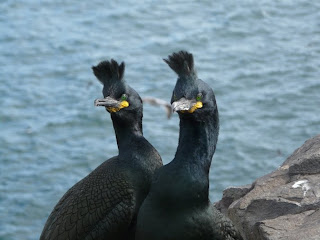 Early start, pair of Shags on the cliffs (Ciaran Hatsell) 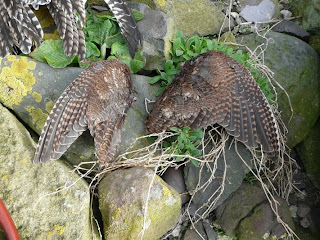 Woodcock wings - one full Peregrine nearby

Tuesday 22nd March comments: It’s been another cracking day as the sunny weather continued and the team have been working hard to get the islands ready for visitors and seabirds. I’ll introduce the team over the next week or two, but everyone is enjoying it and can't to welcome visitors back to the islands.

Interestingly today witnessed the complete evacuation of the islands of all the auk species as they moved off the islands and back to sea leaving the cliffs bare. However the day was notable for northerly passage of Pin-footed Geese as nine skeins totalled 466 moved over the islands, a record spring count for the Farnes. 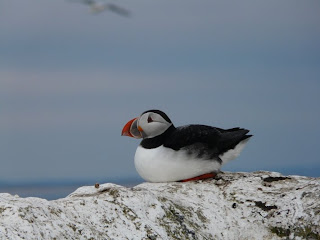 Look who's back... (Ciaran Hatsell) 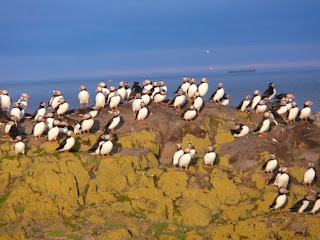 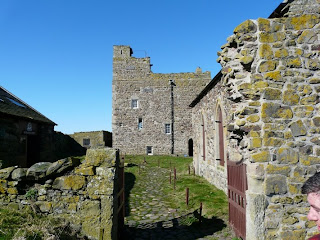 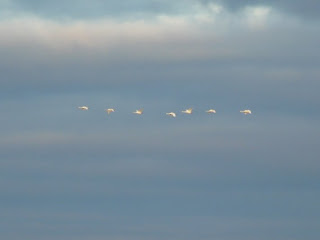 Whooper Swans fly north (Ciaran Hatsell)
Monday 21st March comments: It’s been a cracking start as the fine weather continues to prevail and team moral is high as we enter our first week back on the islands. It hasn’t taken long for the seabirds to react to the settled start and for the first time this year, the Puffins landed – their back and it was great to see them.

Alongside the Puffins, huge numbers of Guillemots were in attendance whilst Shags and Kittiwakes remain loyal to the cliff tops. However it won’t take much to move birds back out to sea and any spell of poor weather, will result in bare islands, it is only mid-March after all. 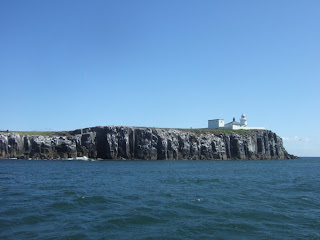 Home for next nine months...Inner Farne 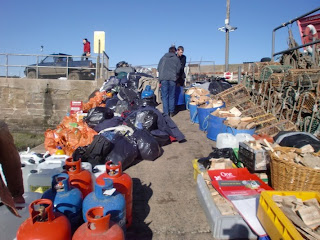 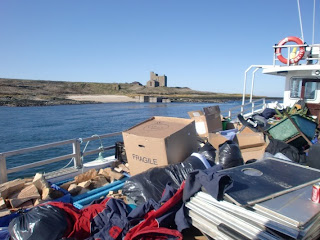 Nearly there - a full boat and Inner Farne 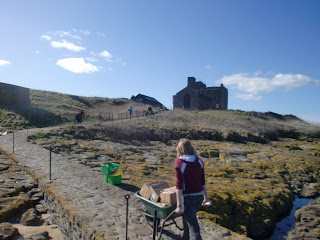 Everything must go - the long haul starts
Saturday 19th March comments:
Where back and it’ good to be here. Following the ‘usual’ week of mainland based training we eventually sailed to the islands on a glorious Friday morning. The team, a mix of returnees and new faces; packed, stacked and filled the boat and we departed Seahouses just after 10am, and sailed across Inner Sound, island bound.

It wasn’t long before we arrived on Inner Farne and we spent the day moving equipment and personal belongings up to the Pele Tower before settling back into island life. We couldn’t have asked for a better start, with glorious sunshine and very little wind resulting in a great way to spend the first day back on the islands. With more settled weather predicted, we could get very use to this.

On a bird front, there were plenty of Guillemots and Razorbills present with a handful of Puffins noted. Shags appear to be well ahead of the game, with some reasonably large nests already constructed (it’s going to be another early start to the season), whilst Kittiwakes are present in good numbers.

Away from the breeding birds, the islands have produced a few noticeable highlights including a lingering Red-necked Grebe, both Peregrine and Sparrowhawk have been seen hunting the area whist seven Whopper Swans moved north today (Saturday 19th March).
Posted by Farnes at 19:57 1 comment: 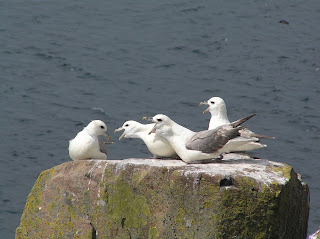 
Wednesday 2nd March comments:
It's not long now, the wait is almost over. In under two weeks we'll be embarking on another Farnes season and another year of bringing you the up's and down's of life on the islands. Everything from seals to seabirds, to warden's life and much, much more. I hope you're all ready and going to come along for the journey. Welcome back to planet Farnes! I can't wait.
Posted by Farnes at 18:40 2 comments: