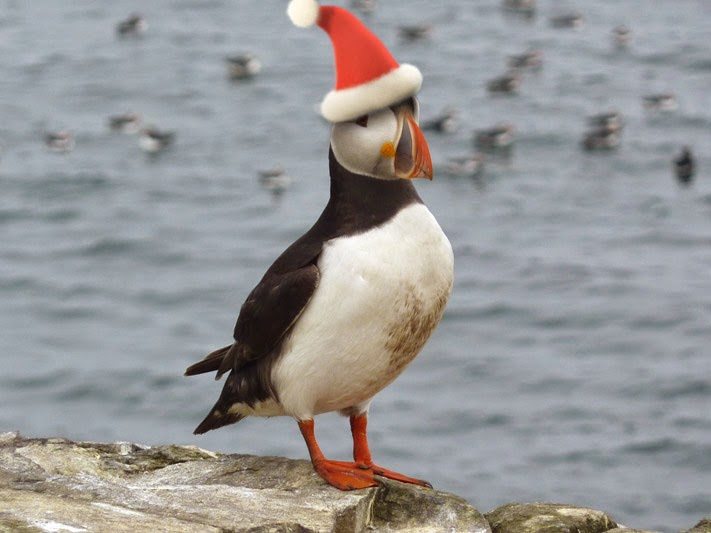 Best wishes from me and all the Farnes team! Merry Christmas
Posted by Farnes at 16:27 19 comments:


Thursday 11th December comments: The dust has settled and we are off the islands! The team made a successful escape last Saturday and celebrated another successful season on Planet Farnes. However more of that to follow…

Back to the islands and we said goodbye to the Grey Seal colonies of the islands for one last time. It’s been a very productive autumn with an even more impressive total as the islands boasted 1,651 seal pups; the highest pup total since 1971! However it’s not just the Farnes as other east coast seal colonies are reporting record numbers as Blakeney Point (Norfolk) have a staggering 2,126 pups and Donna Nook (Lincolnshire) have 1,760 pups.

Interestingly there has been a huge shift in recent years in the Farne colonies as Staple Island has become ‘number one’ nursery whilst Brownsman claimed second spot this year for the first in the modern era. The top island pup totals include;

Over the next few weeks I’ll be bringing you a round-up of the season, from seabirds to escaping the island and much, much more so keep checking the blog!
Posted by Farnes at 15:19 10 comments:

Tis the Seal-son to be Jolly!

Wednesday 3rd December comments: Another day and another count. We’ve been on the Seal colonies again today across the and some big news! has maintained itself as the number one colony but for the first time in several decades, Brownsman has now become the second largest Grey Seal colony on the Farnes.

Its now back to the packing as we enter the final few days on the Farnes and plenty still to do…
Posted by Farnes at 21:15 4 comments:


Tuesday 2nd December comments: Its early December, it’s that time of year again as we’re getting ready to leave. The Farnes have been home to the ranger team since mid-March and we’ve seen and experienced it all. However as we approach Christmas, its time we departed for the luxury and comforts of the real world.


On Saturday we’ll say goodbye to the islands for another season as we’ve started to pack down and lock up the buildings on the Farnes. It’s going to be an intense few days as we’ve still got more Seals to count but also plenty of other work to keep us busy.

I’ll try keep the blog updated nightly to keep you all informed of the latest news, but lets hope for some kind weather and a good finish to the season.
Posted by Farnes at 19:21 2 comments: