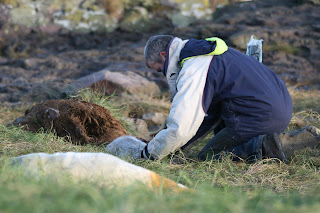 A sad end, a dead pup being checked and tagged 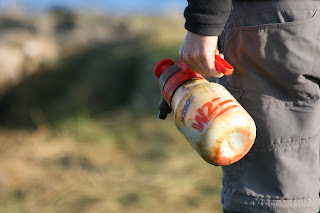 Armed and dangerous, a warden with coloured spray dye 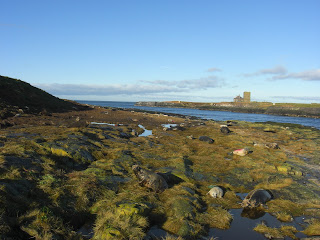 As never seen before: Staple Island (with Brownsman in the distance)
At last a really calm day on the islands and a chance to visit some of the seal colonies to see what has happened since we were last on them. Although we couldn't make all the colonies, the weather pattern appears to be settled for the time being...but not for long. Reports are starting to flood in that we are in for it yet again, as a north-easterly gale is due at the weekend. Oh boy, I thought we had seen the last of those and at this rate, I might be eating Christmas turkey out on Brownsman! (actually don't tempt me, that would be brilliant!). However it was the short leap over to nearby Staple Island a stones throw away from Brownsman.
Like Viking raiders, we landed on the shores of Staple, armed and ready. The island is one of two islands open to the public during the summer as the thriving seabird metropolis supports one of the largest Puffin colonies on the Farnes and it’s a spectacular sight for day trippers. However its late November and only one thing thrives; Grey Seals.
When I first started on the islands back in 2001, the island didn’t support any pupping mothers, but now it’s a major player on the Farnes. The count went smoothly and although we found a few dead, it was evident that mortality was well below the average, more nearer 15%. The sheltered aspect of the island certainly helps and probably one of the reasons why the seals have colonised the low sloping island in recent year. After a few hours marking, counting, tagging and mapping the colony, we return to Brownsman. Staple now has 338 seal pups, an impressive number by any colony standard.
The Farnes have seen a shift in the colonies in recent years as mothers have moved from the two islands of the Wamses (North and South) to the sheltered retreats of Brownsman and Staple Island. I must confess, I can't blame them, as the North Wamses registered a mortality rate of 72% not long back, compared to 22% on Staple. Now you may see why they are shifting! However we leave sheltered Staple Island behind as we move further out into the colonies and what will we discover out on those islands, only time will tell…
Posted by Farnes at 08:22

To the Viking Raiders !!!
Wow David that is some update so thank you , sounds like you dont want to leave your home - turkey is turkey where ever you are and what could be better than sharing it with a seal , you must know those Islands so well having spent 7 years there , its amazing the changes you must have seen and the seals are very sensible to go to the Islands that are more sheltered 338 seal pups counted is great and so is the low mortality rate , I must say I was expecting more than that in view of recent weather , we will wait and see what you find elsewhere .Could it be that in future years all the seals will only go to Staple and Brownsman or are some of them not that sensible ? Presumably as there are now seals on Staple they have moved from other Islands or have the seals increased over the years on the Farnes so they needed to colonise Staple , its no good I am going to have to get a book if there is one so I can answer my own questions !!! It would be nice to know the seal counts over the years , have they increased and could just Staple and Brownsman support the whole colony - it would make your life simple I guess !!. I cant wait to come and visit next year - I mustnt wish my life away but next year is going to be exciting but it all seems a long time to go .
David and Co take care and lets hope this weekend wont be too bad for you

Kezia, you said just what I was thinking - I need a book to find out all the things I want to know - David, if you do get stuck there perhaps YOU should write a book about your experiences and adventures.
The sea looks quite calm in the photos, but not a good forecast by the sound of it. Still, the mortality rate seems to be much lower which is a good sign, and hopefully the sensible seals will have migrated to the more sheltered islands to pup.

it seems a bit odd as I sit at my computer at work in the city (ugh) listening to traffic and sirens outside, but somewhere there's a blackbird singing, and that little touch of nature lifts my spirits, as does reading your blog, hearing the news and seeing the photos. Thank you.