You've Otter to be joking! 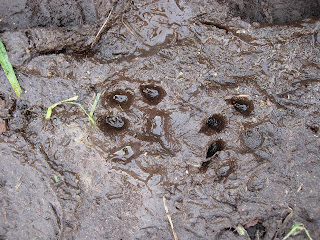 Proof in the mud! Otter tracks on Brownsman (photo by Alex Ash) 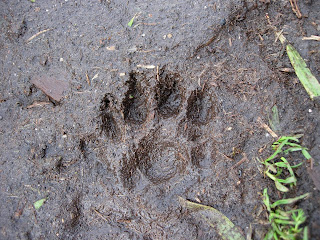 Its no Grey Seal, as Otter discovered on Farnes for first time (photo by Alex Ash)
The footprints in the mud tell its own story. An Otter has reached the shores of the Farne Islands for the first time ever and this wasn’t just any ordinary site, this is Brownsman, an island three miles out in the North Sea off the north Northumberland coast.

It’s staggering that an Otter could survive the perilous journey out to the Farne Islands, especially Brownsman which is so far from shore. There was initial shock and disbelief amongst us as we looked down and discovered the tracks. Just how the animal made it over is almost beyond belief. It’s tough enough for an engine driven boat to navigate the currents and rip tides, but an Otter?! Wow!

This is the first occasion that Otters have been sighted on the Farnes and this probably reflects the boom in the population around the north-east region. The tracks were discovered in the muddy pathway where our old boardwalk was sited (it's been ripped up for a new walkway) and they run for about ninety foot up the island. Although we don't know the age of animal, it maybe safe to assume that it is a young animal exploring from its home territory and it may remain around the islands for some time to come. The rocky islands will offer it a safe place to live as it should find an abundant food supply even during the winter months.
So forget the 80,000 seabirds, 3,800 Grey Seals, come and see the famous Farnes Otters! How strange does that sound and I never thought I would be saying that within my lifetime. My next mission is to see it! It’ll make the next few weeks even more interesting and I'll keep you all posted. As for the rest of the Farnes, those wintry showers with strong winds have just cranked up a notch and those Seal pups really could be in serious trouble...
Posted by Farnes at 07:07

Great news - a 1st for the Farnes , lets hope there is more than one and its a boy and a girl !!! then babies wow !! So it will be a visit to the Farnes to see the otters and the seals and the birds now , cant wait . You sound so excited and so you should be congratulations all .

I know - the otter was a stowaway with the Autumnwatch gang and has been hiding from you since they left :) I always thought Gordon was hiding something under that big puffa coat of his!
Tremendous swim for a young otter though, and how exciting for you to discover the evidence. And the news even got mentioned by Terry Wogan on his radio show this morning - fame indeed!

Blimey, Radio Two, nice one Terry!! The Otter is a real star and I've noticed it in several newspapers (well been told about it anyway - I don't think I'll be seeing a newspaper for a while) and a few radio stations have picked up on it. Its all exciting stuff.

Hello David,
This is a fabulous blog, it is great to read all about your seals, the pups are so cute. It is really interesting to follow your stories about the birds too, so please keep it up and more photos please. Fantastic news to hear about the otter WOW!

By the way you are a very good looking chap!