There could be trouble ahead. 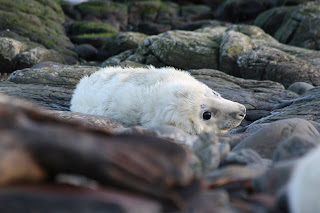 Seal pup without a care in the world 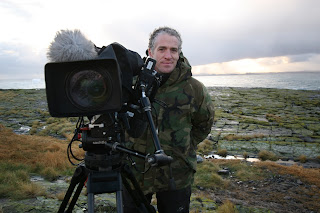 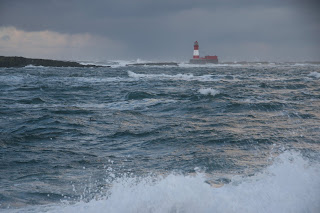 Stormy views from Brownsman towards Longstone
"Forth, Tyne, Dogger: north or north-east 7 occasionally gale 8, wintry showers, good"
For those not familiar with the shipping forecast, that brought only one thing on Friday: storms. Big cold northerly storms with powerful waves which crashed against the ten acre island known as Brownsman. Their was no escape. Weather is such an unpredictable feature of the Farne Islands at this time of year and when a storm blows, there is no stopping it. The day changed little throughout as wintry squalls constantly swept over the islands setting a dramatic scene, as moody skylines were broken by huge swell and large breakers.
This was not good news for the seal pups of the north end. Not good at all, but it wasn't the weather which was the main concern. The four pups were still being accepted and squabbling over the cow and its obvious she is losing weight but will the pups survive? Free milk may be an added bonus for any struggling pup, but will all four make it? But forget the squabbling quartet, something else caught the eye... Nemo.
Nemo may be in trouble. After nearly two weeks of life on the north colony, Nemo should be putting on weight, building up fat layers ready for independence, but its not and its clearly underweight. Why? That is a question I'll try and answer but its now in the balance whether Nemo will actually make it. Fingers crossed. Otherwise the colony was settled, Lucky was being just good old lucky and the cow seals were doing their bit to protect the pups from mother nature.
It wasn't just the seal pups that were braving the weather, as the trusty team of four (the Autumnwatch crew) were out capturing the drama as it unfolded and eventually darkness fell to the sound of crashing waves and strong winds. Saturday will be a telling day. How many pups will survive the overnight storm? Will Nemo gain some weight and what about the troublesome foursome? All will be revealed, very very soon...
Posted by Farnes at 11:16

The photographs are wonderful and gives the blog that extra bit of realism. We had your storm on the Solway a couple of days ago but today is the type of day you want to walk for miles along the coast. Which is exactly what I did this morning. The sea was calm and I saw lots of birds, red shanks, oyster catchers, turnstones, godwits, cormorrant and ofcourse all the gulls. I didn't see the grey seal and the porpoise, in fact I haven't seen them for about 2 weeks now. The weather has been so bad I've had problems spotting anything.
Looking forward to your next post. I do hope all the the pups are safe and well and have survived the storm. Do you think maybe Nemo has lost his mum ?

Whilst I'm one for the "let nature take it's course" approach, are you ever tempted to step in and feed such cubs and attempt to return them to the wild later?