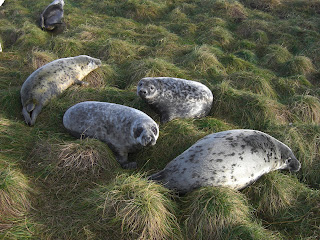 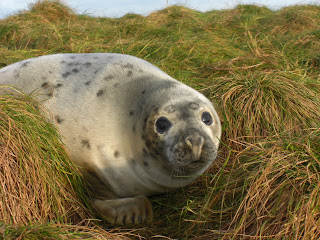 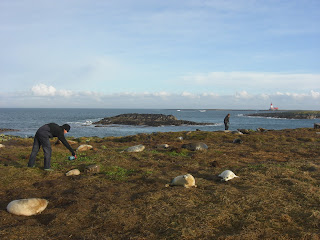 The team in action on South Wamses

Welcome to Sunday morning and I’m sure the dust will be settling on Bobby’s 50th birthday celebrations and there’ll be a few soar heads around this morning. However back on the islands, it’s been a settled few days with light winds and relatively flat seas which have given the wardens and the seals on the Farnes some rest bite. So the colonies have been visited and the latest counts are in, with just one week to go. Staple Island has cemented itself as a major colony and will rank as the second biggest on the Farnes this year with 338 already. It’s an amazing transformation and it’s only a mater of time before it becomes number one.

The South Wamses, the current champion, is home to over 350 and it was good to catch up with a few old friends that I’ve come to recognise over the years (yes, some females will pup in the same parts of the same island from year-to-year). The great news is that the island was brimming with second-coat pups including one little fella we hadn’t seen for a few weeks; Archie. It was clearly Archie as his red mark on his tail flipper gave him away but he’s changed. Like Nemo and Lucky, he’s made it. His second coat announces that he’s ready for the brave new world of the Farne Islands. Like all our pups, we wish him good luck and I suspect it won’t be the last time we see this wee chap on the islands.

However it isn’t all good news, it never is. It was very evident that most pups born on the north or east edge of the colonies have experienced great losses. The brunt of the storm had been felt on several islands and lifeless corpses were scattered across the colonies. As part of my job, I have to gather, tag and mark all dead pups found, and as I go though the process, I try not to ponder the difficult circumstances which they battled against, and lost. Mother Nature had done her job but she had done it too well.

However heads up, we’re getting some great success and mortality will be slightly below the 50% we expect on the islands. Since the first pup born in late September, the colonies now boast 1,114. As we head into the final week on the islands, a lot could change and a lot will, but you still with me? Keep reading stay tuned, as the islands are heading into December…
Posted by Farnes at 08:17

Thank you David what a treat for a Sunday morning to hear from you - do hope Bobby is okay and will transport you safely when the time comes for you to to leave - a sad day !! So pleased Archie has survived - it is a sad job for you to gather the dead pups but as you say nature has a way and perhaps it is the correct way of dealing with things although it seems not to be down to fittest surviving it seems to be down to where mum has the pup more - lets hope those mums will learn and maybe get to a safer place next time . I am certainly staying with you David to the end and will miss your updates when you go , take care all and hope the weather is going to be kind to you in your last days .

Of course we're still with you! It's quite addictive reading the blog and seeing the photos. I suppose I shall have to go into withdrawal symptoms when you finish for the winter.
Sad to hear of the many dead pups, must be awful to have to collect and tag them etc, but for research it has to be done. As you say, the survival rate is pretty good for the Farnes as a whole.
Let's hope for some calm weather for your last week on Brownsman.

Of course we're with you. I live in Holland and have been reading your Blog ever since you started writing it.

Hope your last days on the Farnes will be great.

Steely - A farnes blog at last - about bloody time n'all!!!

Hi all (thanks for the great comments).

Oh its grim out here this morning (Monday morning) and my next update will be posted on Tuesday. The blog will keep going even next week (plenty of leaving stories and news) and then I'll be plotting next seasons blog and how it will look (lots of seabird and migrant news, cetaceans, seals and behind the scenes look at island life). Keep yu posted.

confused! I'm sure there was a post on the blog this morning whiich I replied to...and now it's gone!