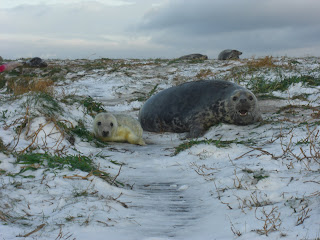 Mother and pup in the snow on Brownsman 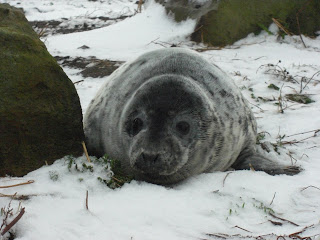 Whats this? A second coat pup in the snow 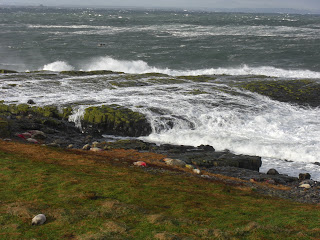 The storm rages across the north beach colony on Brownsman
The wind blows and the storms rage as the Farne Islands are battered from the north for yet another day. There is no escape for anything or anyone and to complete the scene we soon have snow fall. The islands have had a good dusting today and the seals look a little bemused by the white stuff but they don't have a problem with such small trivial matters, as its the pounding North Sea which frightens them the most.
As I walk across the south beach, I discover two young Seal pups in the tangled kelp on the shoreline. Both are lifeless, both are dead. Death is something we have to accept out here, as it’s evident throughout the autumn months, as pups are lost to disease, or inexperienced mothers. However it was the harsh realities of the North Sea this time last year which accounted for over 600 of our pups and I'm expecting a repeat this time around. Once we've had the chance to visit the other colonies and crunch some numbers, I suspect we won't be too far away from that 50% loss. Its a cruel world out here and any pups born on the north end of the islands recently probably won't have lived to see the snow which fell this morning.
As the chill factor dropped to -5.9 degrees, I was stopped in my tracks. Life on a rock. Not all was lost in the storm and if I rubbed my eyes in disbelief at the discovery of the Otter tracks, then glancing over to Nameless Rock nearly bowled me over. For there clinging to life on top of the small island, is the pup I had given up for dead. That pup must have seen it all in the last twenty-four hours, but regardless its still alive and what a fighter. Without doubt we will have lost plenty but there will be many which survived and will live to see the world of the Farnes for another day.

Silence. Where not out of the woods yet, not by any stretch of the imagination...
Posted by Farnes at 11:15

How sad to find the dead pups, but as you say, it's part and parcel of the natural order, and while it may seem nature is cruel, we have to accept it. If the pup on Nameless Island survives, you should name him Rocky - he's obviously a fighter and he's clinging to a rock!
Looks like North-Northeasterly today, but growing a bit milder towards the middle of the week which hopefully will give the seal pups more chance.
How much longer are you on Brownsman?

The forecast looks good for the end of the year so fingers crossed! Its blowing a direct northerly gale and yes, its cold. We depart the islands in little over two weeks time, so plenty more news to follow.

Goodness David it throws it all at you doesnt it but I am sure you take it in your stride , it must get really sad sometimes but then you see something wonderful like little Nemo - or not so little now - and then the little one on Nameless Rock lets hope he will get stronger and survive . Thank you so much for your updates and hope you can at least keep warm when the light go's but you must wake up every morning wondering what next . Take care .

Hi David (are you any relation to John Steel?), just stumbled across your blog via Boulmer Birder, I'll give it a good read soon. Slightly odd as I'm in Bristol at the Beeb. Good to see a blog from the Farnes, and I do hope you keep it up, it's hard work thinking up news and views but great fun and great for us ex-pat Northumbrians to know what's happening on the Islands.

I'll link to your blog if that's okay, spread the word etc.

Good to see Otters on the Farnes too. As you'll know they've been at Howick Pans for a few years now, presumably one of those, however it's a good old haul across the sea, even for an otter.

A big hello from the far north Border Revier! Welcome to the blog. John Steel is a good friend and on the Farnes Committee but no relation (and yes, wish I could draw like him!). Good to see the mighty Bristol is now tuning in. I'm going to get everyones views soon as thinking of having a blog from the islands from March-December next year so watch this space!

David Steel! How are you my old bean? Looking forward to following life on the farnes from now on.....great blog mate!

OOh a March-December blog would be fantastic, it really makes me feel like I'm involved in all the events, if only from a long way away.