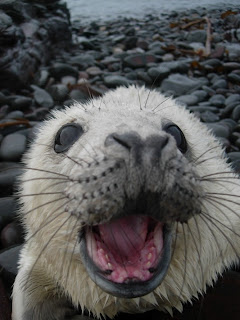 Up close and personal - a Farnes Seal pup 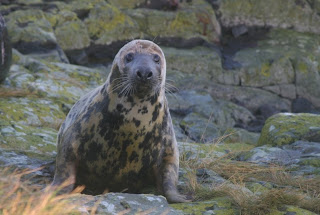 Keeping tabs on us - a Cow Grey Seal 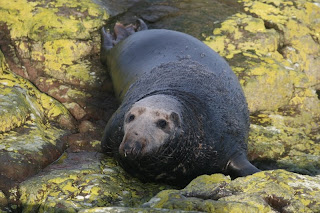 Given respect - a Bull Seal on the rocks

Thursday 29th October comments:
It’s all change on the Farnes. Yesterday and today have witnessed some fantastic weather, and it was almost hard to believe that it was late October. The sun was out, the sea was flat calm and the team were full of busy! It allowed us access to the Seal colonies, visitors arrived in their droves and we even made it the sanctuary of the mainland for vital supplies (although Anne Wilson, the Farnes historian, brought some fantastic cakes and biscuits out for the team!). So a busy 48 hour period.

The visit to the Seal colonies was productive as the number of pups has topped the 200 mark with the island of North Wamses leading the way with 103 born. Last season we witnessed a Cow on the north shore of Brownsman suckling not one, but four pups and we’ve seen it again! However this time it involved a female on the South Wamses suckling three pups – it was very unusual to record it last year but a repeat – unheard of!

Migration through the islands continued as the Richard’s Pipits remain although they did consider departing (at one stage we watched them fly off west towards the mainland before returning – they have to go soon!). Interestingly a Yellowhammer arrived on Brownsman (the first on the islands in two years) alongside 21 Twite, whilst the Snow Bunting flock on Brownsman peaked at fifteen. As for the forthcoming few days, its looks like where in for a turbulent time and don’t look at Sunday’s weather, its going to get very, very interesting…