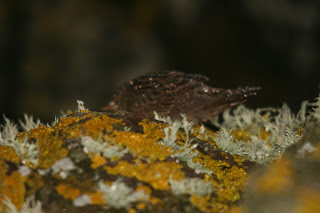 The one - its not a great image but enough - Lancy on the rocks
(well done lads for snapping this in difficult conditions and fading light!)
Wednesday 30th September comments:
Its been a while since I updated the blog so here goes…

It’s been a long, slow September for the birders on the islands, as a series of westerly winds has produced very little in the way of bird migration. In fact nothing. I suppose it’s a bit harsh as we’ve had a Black-headed Bunting amongst others, but it’s been slow going at times.

However that changed on Tuesday and I should have known. I walked off the islands on Monday evening to attend an all-day ‘conflict and resolution’ training course on Tuesday as part of my job. After weeks (it has felt like an eternity) of westerly winds, I decided to leave on the only day an east wind decided to blow and that proved to be a big mistake, a real big mistake...

As forecast, the wind switched and by Tuesday morning, the islands were full of common migrants, as Skylarks and Pipits were present in their hundreds, Brambling and Chaffinch arrived from the east and the occasional oddity was discovered including a Lapland Bunting on Inner Farne. Then it happened.

The lads decided to check the most easterly island as time slipped away, as they arrived on Longstone (some 4.5 miles out from the mainland) at 18:30 and were greeted by a small number of migrants feeding amongst the lichen covered rocks (which is always an odd sight). The rain was falling and light was starting to fade but in the gloom, the team picked up on a small creeping warbler as it ran around on the open bare rock. The bird, small in appearance with the odd behaviour of preferring to walk rather than fly, was seen well by the lads and then the penny dropped. The team had discovered a ‘Lancy’ – (also better known as LANCEOLATED WARBLER) a very rare warbler from eastern Siberia.

Unlike anything else this season, this was a real rare – less than 120 records in the UK and most of those are from the Northern Isles of Scotland. Even Northumberland only boasts two previous records – on the Farnes in 1995 and Tynemouth in the late 1980’s. As light disappeared, the lads returned to Brownsman, to celebrate, but in the knowledge the world would be watching.

Due to a set of unforeseen circumstances, the internet ‘dongle’ was on Inner Farne and photos of the bird could not be forwarded to an anticipating head warden. Eventually the pictures were sent to me (I’m still mainland-bound at this moment) and the discussion began. At this stage, I got Ian Fisher, a very knowledgeable and well respected Northumberland birder ‘in on the act’ and following a review of the photographs (not the best of quality due to fading light and poor conditions), everyone was happy and the bird was a Lancy (not that my team had any doubts!).

It was great news for the lads (brilliant work team – that’ll be something you’ll not forget for a long time!), great news for the Farnes and the County, but not such good news for myself and many other birders who would have loved to have seen it!! To their credit, the team were on the Longstone complex very early Wednesday morning, but sadly the bird was gone.

Good Work Bonny Lads, well happy for you!! Steeley, you have my utmost sympathies.
Congratulations to Davy for managing to get a pretty lighting effect in the photo too.

ha ha, we missed your photography skills (its no good being at Uni now!!)- the Farnes strikes again. The camera kept focussing on the rain rather than the bird, but Davy will learn... and yes its still hurting...

Good work lads, you deserve it after all those westerlies.
Looks like your luck ran out Mr Steel, lets hope we can refind it on The Uists!
To echo Joe's sentiments the outer group does indeed rule.