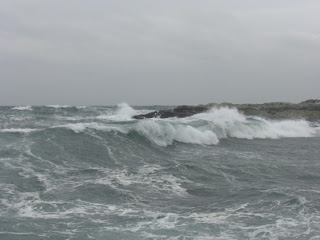 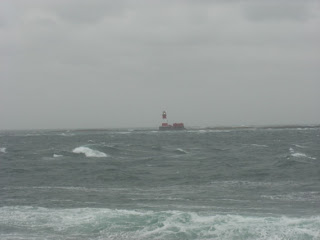 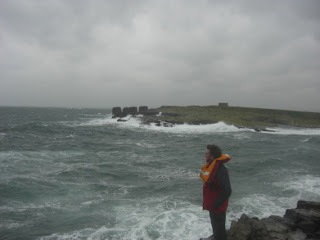 Tuesday 20th October comments:
Good morning world, its storm time. I woke just after 3am to the sound of ‘dancing’ roof tiles – the storm was starting to bite and by dawn it was evident the forecasters had indeed not got it wrong. The south-easterly wind had kicked in during the night and it was raging and things did not change during the day - the wind and sea just battered the islands, relentlessly. The forecast is indicting that we’re due to be battered until at least Sunday – that’s five days away, so where in for a long haul.

Despite the weather life continues as normal on the Farnes, as the team got on with a few bits of practical work, whilst the first Grey Seal pup was born on Brownsman, well away from danger at the north end of the islands. We also had the bizarre sight of male Eiders, now back in their striking full summer-plumage (having been in moult during the late summer) starting to display. So there we had the surreal sight of displaying male Eiders in huge mountainous seas - what a crazy world, but then again this is the Farnes and its no ordinary place...
Highlights: Peregrine, Woodcock, Fieldfare 11, Redwing 73, Richard’s Pipits 2 – both still here, there going nowhere in this! The birds remain vocal and flighty at times, but appear very settled on the island (maybe linked to the lack of predators – raptors have been few and far between and we’ve got no other ground predators on the Farnes), Ring Ouzel 2 (male and first-winter), Blackcap male, Brambling and Reed Bunting 2.
Posted by Farnes at 20:58

We need pictures of those seal pups! :)

Your obviously not getting the ransom so I think you should let the Richard's go now, you know it's the right thing to do.

Good to see health and safety procedures are being adhered to and life jackets are being worn on all occasions.
Looks fairly brutal out there but I reckon it should bring you some birds over the next couple of days, at least you're stocked up and not resorting to a 'honey and dog milk' scenario.
Good luck monkey boys.