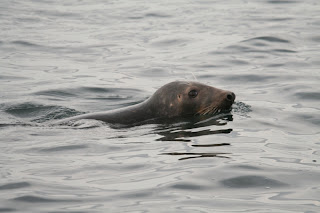 Keeping a close eye on things - an adult Grey Seal 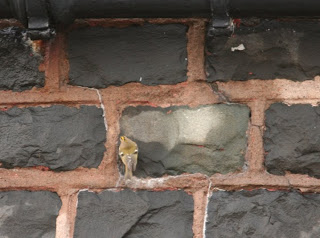 One on the wall - a Goldcrest checking for food against the cottage wall
Tuesday 13th October comments:
It’s the autumn and that means one thing: seal pups. The team were up bright and early this morning, as the weather allowed our first major check of the Seal colonies and we were not disappointed. The main colonies of the South and North Wamses produced six pups, although sadly two were dead, but this is expected on the Farne colonies at this time of year. The first pup of the season born on 4th October is doing well and being well protected by its mother, but sadly I forgot my camera so no photos today!

On the migrant front, the day brought a reasonable movement of Thrushes as well as a few other migrants and the lingering Richard's Pipit was still present on Brownsman for its third day. However we were stunned whilst watching the bird mid-afternoon, as there was not one, but two birds, as a second had arrived and decided to join up with the first - a double bonus but not surprising as this is the Farnes!
Highlights: Goldeneye 6, Merlin, Peregrine female, Woodcock, Arctic Skua one mobbing a Kittiwake, Short-eared Owl on Inner Farne, Richard’s Pipit 2 on Brownsman (one having been present for three days), Wheatear, Skylark 3, Blackbird 112, Redwing 933, Song Thrush 22, Fieldfare 113,Garden Warbler, Chiffchaff 2, Blackcap female, Goldcrest 4, Greenfinch, Brambling 10 and Reed Bunting 7
Posted by Farnes at 20:54