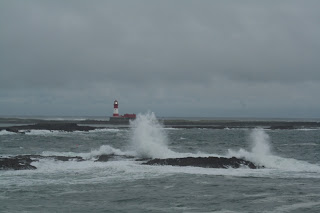 Saturday 24th October comments:
Was it over? Had the wind eased, were we going to escape for vital food supplies and would the islands be open to the public?

No. short and simple.

Overnight the wind had returned and within a few hours of daylight, the huge breaking waves hammering the islands had returned. We’re not getting out of this in a hurry. The islands have been battered since Monday evening and yesterday we experienced a calming off period when we thought our chances of escaping was good. How wrong could we be. Looking at the forecast, its going to be a tough week ahead and we could, possibly, be looking at next weekend before its calm enough to leave. Rationing water supply and food has just reached top of the agenda. Its storm season and don’t we know it.

Away from the storm, the Grey Seals continue pupping, as just since yesterday, five new pups have been born on Staple Island but we’re not due to make an official count until Tuesday. Otherwise all is well and the pups are keeping clear of the turbulent seas and the madness that is the North Sea. Migrants were few and far between today, as lashing rain and gale force winds made viewing very difficult. However it was obvious that we’d had a clear-out as most birds had disappeared and moved on.

Hey, how about cup noodles?
I found many different flavors here
yummiexpress.freetzi.com