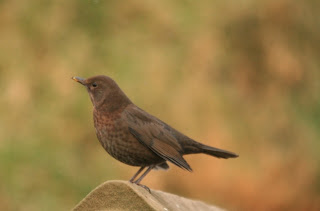 Blackbird's on the move - heading west to winter in the UK 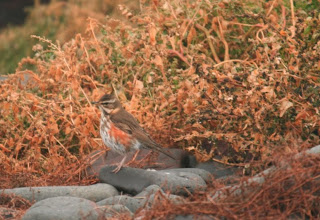 In coming - Redwing on the Farnes
Sunday 11th October comments:
Following yesterdays avalanche of birds, the wind switched direction and increased in strength, almost reaching gale-force from the north-west. The result was an almost complete clear-out of passerine migrants from the Farnes although the day brought one surprise. As the team were about to start work on building some new boardwalk on Brownsman, a Richard’s Pipit, a rarity from Siberia, dropped in and showed well before flying off to nearby Staple Island. The bird was refound on Staple by the team before it returned to Brownsman later in the day, the 18th Farnes record.

Whilst I was away on the South Uists (meeting no fewer than three ex-Farne wardens – great to see you boys!), the team recorded the first Grey Seal pup of the year! The pup was born on the South Wamses on 4th October and both mother and pup are doing well. So the first (of no doubt many) have been born and it'll probably be another roller-coaster of a ride over the next six weeks, so stay tuned - the Seals are taking over and weather is on its way...