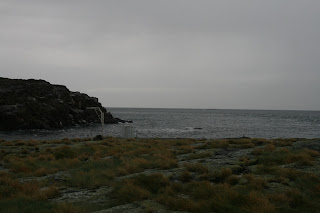 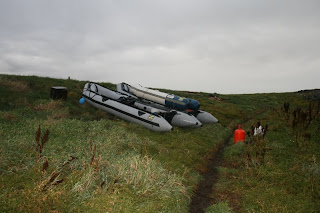 Zodiac boats secured and away from the jetty 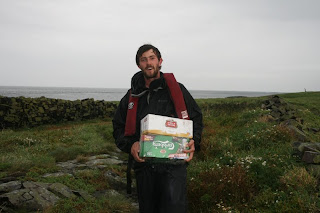 Jason with vital supplies - the beers!
Monday 19th October comments:
The siege is on. It’s the autumn and only one thing keeps us on our toes – storms, big blasting storms and its coming. The forecast has been building it, the isobars are getting tighter and the wind is increasing. Next stop – mayhem.
The islands are expecting a battering as a raging south-easterly storm which, if forecasters are to be believed, will last the week and not much is going to stand in its way. The wind will blow across the North Sea, and stop at the first thing in its way – the Farne Islands. Expect trouble. Today has seen some important work – planning for a siege. The local Co-op was happy with the teams arrival today as we spent over £200 between four of us but we’re fully stocked and ready. The islands boats and equipment have been moved and secured, the storage areas lashed down and entrance signs removed. It’s going to be brutal but we’re ready.
As for the Seals, where up to 26 pups as the team made it onto the colonies yesterday and their all doing well, but then again in calm conditions its what we'd expect. Hold on to your hats, its not just the wardens about to experience a battering, the big seas might just cause the Seals a few problems…watch this space.
Highlights: Brent Goose 2 pale-bellied lingering, Richard’s Pipit 2 remain – still present together on Brownsman – will they ever leave? Chiffchaff, Blackcap male, Brambling and Reed Bunting 2 – generally quiet
Posted by Farnes at 19:52