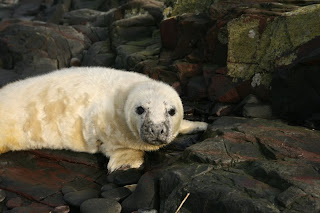 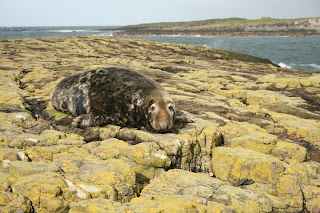 
Monday 26th October comments:
So it goes on. The wind direction may have changed but where going nowhere. Just over a week ago, a south-easterly weather front battered the islands and it’s not stopped since. Today, at long last, the wind switched direction swinging to….the north. Things don’t get much better, as instead of a hammering from the south-east, we’ll just take it from the north. However it’s all change again tonight as we head back to south-easterly gales. Role on some calm westerly’s… Despite the storms, the teams morale is still good although with sugar and milk running low, it may change in the near future (the lads aren’t keen on long-life milk…)

On the islands, the number of seal pups increases daily and we’ve had several new arrivals on Staple Island whilst two more pups have been born on Brownsman. The storms appear not to be causing many problems however where still a few weeks away from peak birth rates and peak time for storm season. It’s going to be interesting.

Highlights: Richard’s Pipit 2 remain on Brownsman having originally arriving from the east on 11th and 13th October respectively – these really are record breakers for the islands – they don’t want to leave! Willow Warbler, Firecrest – a new arrival on Brownsman, the 4th this autumn, Goldcrest 2, Snow Bunting 2, Reed Bunting 1.
Posted by Farnes at 20:48