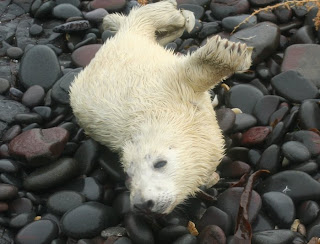 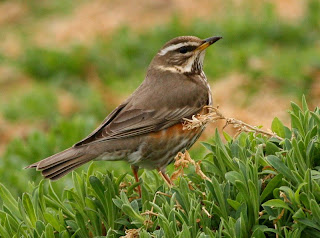 On the move - small numbers of Redwing 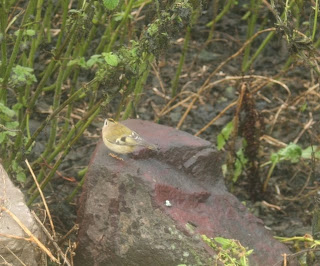 Its a small world - Goldcrest looking for food
Thursday 22nd October comments:
It’s not over and we know it. Day three and there was no let up. The day witnessed a drop in the wind, but the booming south-easterly swell was still producing waves big enough to crash over the Pinnacle stacks, which tower 80ft above the surface of the sea. This is some storm season and the wardens understand one thing about this time of year; there is no escape. As darkness fell, the wind was whipping back up and the stormy seas were angry once again, where in it for the long haul.

Despite the storm, the Grey Seals just get on with daily business as if nothing is happening. The bulls have moved up onto Staple to defend important colonies, whilst young pups, few in number, cling onto shingle banks hoping the next big wave is not their last. Thankfully all seals appear fine and well, as Staple Island now has two pups whilst Brownsman has just got the one. Hopefully the team will be able to visit the satellite colonies soon, as we should have a few more to report.

Migrants birds have continued to filter through the islands with a few interesting arrivals. However the day belonged to a cheeky Goldcrest which roosted overnight in the dormitory in the cottage before being released unharmed as dawn broke over Brownsman. The little bird, Britain’s smallest, has probably crossed the North Sea from Scandinavia and a little rest bite and warmth in the cottage was probably most welcome. Interestingly, the bird returned tonight and we’ll be heading to bed later with a Goldcrest sleeping alongside us for a second night...