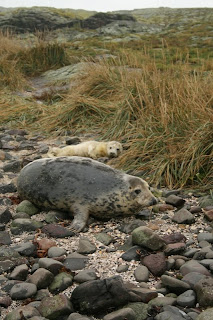 Mum and pup sticking close together on Staple Island 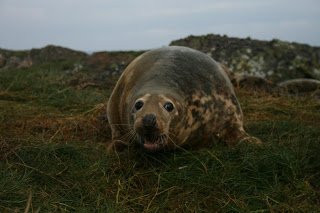 Stand clear - an angry mum warning us off 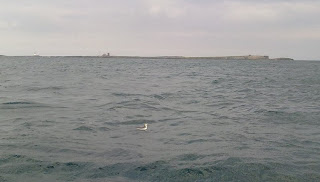 Friday 23rd October comments:
Dawn on Friday, the end is neigh; the storm is over.....or is it? As the first rays of daylight streamed across the Farnes, the team were up and about although we had a few ‘over-night’ guests to release as both a Goldcrest and surprisingly, the Firecrest had taken advantage of the warmth of the building. Its not every day that you share a room with some migrant birds, but nothing should surprise us anymore. This is planet Farnes after all.

Although the open sea remained mountainous, the wind had eased enough to allow us access to the nearby Seal colonies. So Friday was a busy day as the team went about spraying, counting and tagging the young pups on the islands and we’ve now got a respectable 96 new pups (only 1,200 to go.....).

On the way back we discovered a Grey Phalarope feeding on the surface of the sea – a great little bird which showed well by our Zodiac inflatable. However due to the lack of cameras on board, I had to use my phone to sneak a few 'record shots' of this unusual visitor. 'Grey Phals' are annual on the Farnes although still remain rare elsewhere - it's the beauty of sticking four miles out in the North Sea! However as darkness fell, all was not well. The windows were rattling, the wind had increased once again from the south-east and here we go again, there is no escape.
Highlights: Grey Phalarope 1 in Staple Sound between Inner Farne and Brownsman feeding on the sea by boat! Lapwing 1 west, Woodcock 2, Richard’s Pipit 2 yet again, Fieldfare 16, Redwing 38, Song Thrush 9, Blackbird 27, Wheatear 1 lingering, Robin 15, Redstart 2, Black Redstart 2 (Inner Farne and Brownsman), Blackcap 2, Willow Warbler, Chiffchaff 8, Firecrest 2 (Brownsman and Inner Farne), Goldcrest 11 and Reed Bunting 4.

Hi David and co just to say I havent forgotten you all just no computer for about 6 weeks now , on netbook but not good !!! hope all is going well with seal counting so love them , cant believe it was a year ago you had Autumnwatch out there as my Archie is one year old soon so will Archie the seal be . Take care and hold tight on the Zodiac .