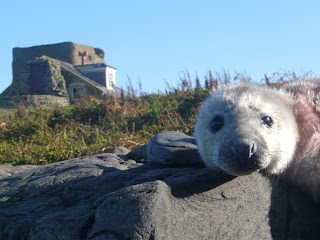 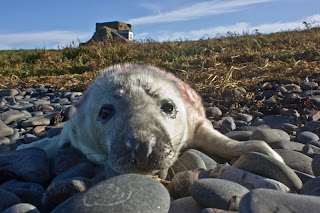 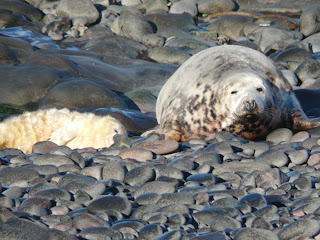 Tuesday 18th October comments: We were talking about it yesterday, but wasn't expecting it for another week, but Brownsman has its first Grey Seal pup. Born mid-afternoon, the new born is doing well with mother in attendance and its a cracking start to the Seal season. Where asking people to name it, so any suggestions would be most welcome. However for the time being, the first pup of Brownsman will be spending its first night on the island - welcome to the Farnes.

It wasn't just Brownsman getting in on the act, as Staple Island now has four (the first was born only yesterday) so the Seal season is well and truly upon us. Where hoping for the wind to ease by Thursday and then we'll be on our first mission to all the colonies and will bring you even further news. A great day with many more to follow.
Posted by Farnes at 21:59

Whats this.. a Farnes blog post without mention of any birds... must be a first.