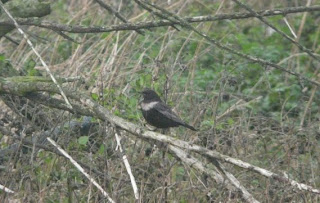 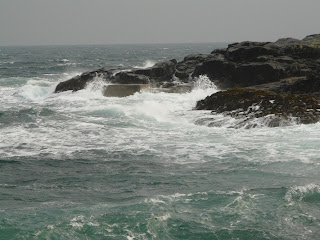 It may not look much, but it's stormy! (Ciaran Hatsell)

Sunday 23rd October comments: It's been another blustery day on the islands as the winds have increased and gradually switched to the south-east. The birders on the islands are starting to get excited (these winds could bring in some very interesting migrant birds) although its not so good from the visitor point of view (probably no boats sailing until Wednesday).

Following yesterdays seawatching highlights, today followed suite with another Grey Phalarope, the lingering Sabine's Gull and two Little Auks all in Inner Sound. Although a scattering of migrants tried to steal the show including Black Redstart and Ring Ouzel, the real winner was a Corncrake, which exploded under the feet of an observer on Brownsman - our second of the year, but the first living specimen following the discovery of a raptor kill back in September. What tomorrow will bring is any one's guess, but its probably going to be good. Here goes, wish us luck.