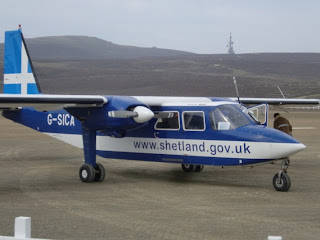 Flying to Fair Isle (in a gale!) 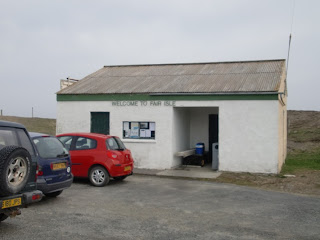 Tuesday 4th October: A quick update from the northern Isles as myself (David Steel) and assistant warden Jamie Coleman are visiting Fair Isle for the week. Its been an interesting start as Jamie touched down on Fair Isle on Saturday but I was delayed on Shetland until Monday. However between that period, the wind had notched up a level and I eventually departed Shetland for Fair Isle in southerly gales on Monday morning. As I'm not the best of fliers, this certainly went down as an 'experience' I'll never forget...

Now on Fair Isle the birding has been generally quiet (due to westerly winds) although it's been great to catch up with lots of friends. Ex-Farne Islands warden David Parnaby is now the main warden of Fair Isle whilst Jason Moss works alongside him as assistant. Other Farne Island connections included visiting ex-wardens Chris Dodd, Micky Mahar and Matthew Smith, so we're not short of topics to discuss. I'll keep you updated from the northern isles but keep tuned into the Farne Islands and more news about our Grey Seals.
Posted by Farnes at 20:06

hope all is well on Fair Isle , hope to make it there one day , made Orkney this year which was lovely , enjoy the birdlife .