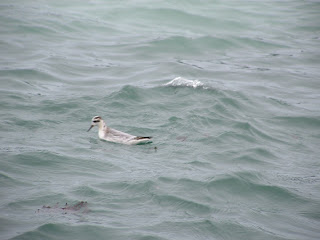 WHAT a day for Grey Phalaropes on the Farnes 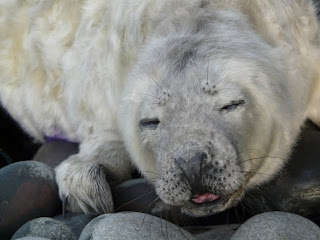 'Neil the Seal' sticking his tongue out (Ciaran Hatsell) 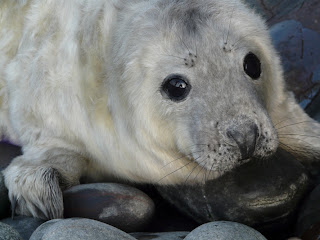 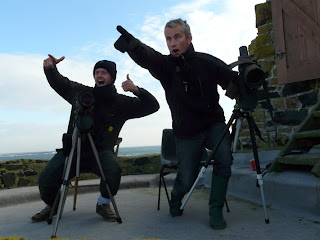 The boys enjoying the seawatching and Grey Phalarope spectacular

Saturday 22nd October comments: It's been an enthralling day on the islands as we've seen it all. The day began with a southerly breeze and a rush of excitement as resident warden Ciaran broke the silence with the shout of "TWO GREY PHALAROPES SITTING ON THE SEA!" Moments later I joined him to enjoy this stunning sight, as the birds were feeding just 20 metres offshore from Brownsman, not a bad way to start the day!

However as we watched, the two took flight and decided to track north which wasn't such a good idea as one of our resident Merlin's decided to try its' luck. Astonishingly the Merlin pursued its quarry over the sea and in a bold attempt to escape, the Phalarope gained height and when we lost the pair, both were specs way above Brownsman. The outcome of the chase was not known but minutes later, we did see a Merlin return empty taloned. That was one lucky Phalarope.

Seawatching throughout the day was very productive as we recorded all four Skua species, a juvenile Sabine's Gull, a very late Arctic Tern, and two lovely Little Auks. It was all go on the islands. The excitement didn't finish there as mid-afternoon a total of six (YES SIX) Grey Phalaropes were seen on the sea together, all in the same field of view. The birds were feeding together and this represents a new Farnes record count and an incredible sight in British waters. Six of the best!

On the Seal front, Brownsman now boasts six pups (each day brings more and more) and our first, now named 'Neil the Seal' is doing well, being cared for by its attentive mother. During the process of checking the Seals, we came across a pup being born, a truly amazing sight rarely seen on the islands (I've only ever seen this on a handful of occassions in eleven years). What a day, roll on tomorrow.