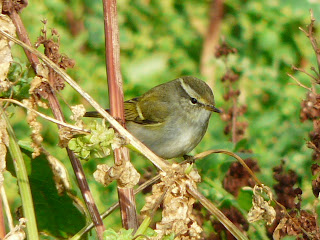 The Yellow-browed warbler sits in the Brownsman vegetation (Ciaran Hatsell) 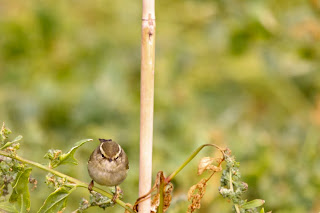 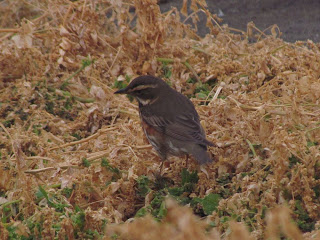 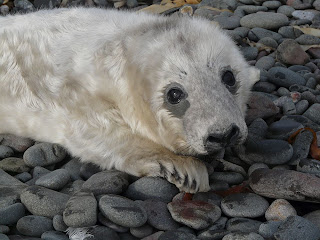 Tuesday 4th October comments: Old man westerly has awoken once more, with forecasts showing at least a week of strong winds from our least favourite direction! The change in direction has quashed any hopes of further rare migrants for the time being, and will put a stop to the passage of Scandinavian migrants such as Redwing and Song Thrush, as they get pushed into the European Continent.

Monday, however, brought another Siberian surprise to Brownsman island, as yet another Yellow-browed Warbler was found by the pond. This tame individual was viewed well by the two resident wardens. Inner Farne played host to the first Jack Snipe of the autumn, and a lingering Yellow-browed Warbler from the previous day.

A welcome addition was a second seal pup, discovered on the North Wamses, and most likely one day old. Our first seal pup is still going strong on the South Wamses, and has put on quite a bit of weight; he can often be seen being suckled by his attentive mother on the shingle beach. With many pregnant mothers now congregating on the islands, and bull seals hauling themselves onto the rocks keeping an eye out for potential opportunities, it won’t be long until the seal breeding season is well underway.

By this morning, most of the birds have gone from the islands, though a few Brambling and thrushes remain, along with Wheatear and Willow Warblers. The warden team is hoping that the westerly winds will break sooner rather than later, bringing an opportunity both for viewing migrant birds and for getting supplies and showers on the mainland!