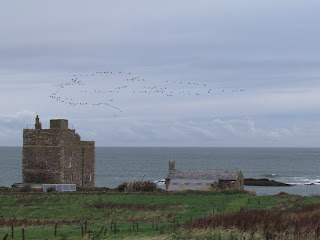 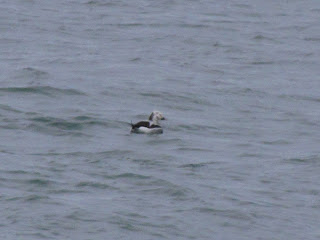 A Long-tailed duck lingers in the kettle (Andy Denton) 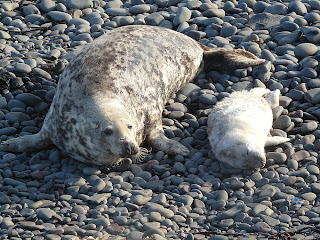 Saturday 8th October comments: It’s been lovely weather...for ducks (and geese). Whilst the overcast, damp climate may not be so good for the human denizens of the islands, the migrating wildfowl have been enjoying it greatly.

The wardens recorded the highest ever number of Barnacle Geese on the Farnes, with 1405 of these winter wanderers passing over the islands today. Having finished breeding in their northern territories such as Svalbard, they are now heading south-west to overwinter on the Solway Firth. One skein of 70 also included a first winter Whooper Swan cygnet, tagging along for the ride! 6 pale-bellied Brent Geese were also recorded flying north over Inner Farne.

As if not wanting to be bested by the wildfowl, the Islands also produced good records of divers, with 27 Red Throated, 3 Black Throated and 2 Great Northern Divers spotted by the team. A much admired Slavonian Grebe winged its way northwards along the Inner Sound, the first of the year, a cracking winter plumaged adult. Keeping with the firsts of the year, a winter plumage Black Guillemot or “Teisty” briefly landed on the Inner Sound before heading northwards, whilst the first Twite of the autumn was spotted flying amongst Inner Farne’s lingering flock of Linnet. Three late Sandwich Terns were also seen around the islands, possibly the last to be seen before they return to breed next April!

In other news, it appears three is the magic number, as our third grey seal pup has been born on the islands. Found on the North Wamses on the 7th October not too far from pup number 2, he should be in good company as he grows up! Large gatherings of females are now appearing on the rocks and tops of the islands, with only one purpose in mind, it won’t be long until the outer group of islands is speckled white!

Ron's looking good. Glad to see you're sticking videos on :)

Thankyou for such amazing photo's. I've been waiting for the Barnacles to come to Caerlaverock (and for Brambling to come to my garden)
Isn't twitter a great way of sharing just this sort of info.
Wind's SW now so I guess we shall have fewer birds coming over for a while.

Yay for Slavonian Grebe! If they ever come close enough, check if they're ringed!