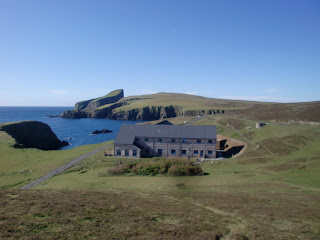 Monday 10th October comments: A quick update from the northern isles. We've (Steely and Jamie) have now been on Fair Isle for a week and its been tough going. The winds have generally been gale force from the west, with occasional switches to the south-west; In other words, not very good for migrant birds! Despite this, highlights have included the islands first ever Lesser Scaup, along with Short-toed Lark, Rose-coloured Starling and a smattering of migrants. However not all is lost, with six ex-Farne Island wardens present, were finding plenty of time to catch-up.

Otherwise it's just like the Farnes except bigger in all ways - a fantastic observatory (with some great staff!), a brilliant island and a real sense of wilderness (with the odd good bird thrown in) - I recommend everyone to visit at some stage. The only thing it lacks is a successful seabird colony. It's been another desperate year for Fair Isle seabirds, as numbers of certain species have dropped and the number of young fledged almost non-existent. It's heartbreaking to hear just how depressing seabird seasons are becoming in the northern isles and will we ever see a reverse in fortunes? I suspect sadly not and it just shows the importance of places like the Farne Islands in a national context to seabirds. Long may our breeding seasons continue to be successful and Fair Isle to have a change of fortune, sooner rather than later.
Posted by Farnes at 15:16