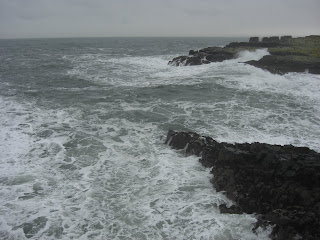 This morning on the south end of Brownsman, yes another storm 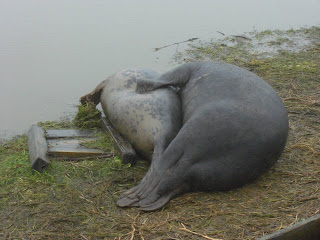 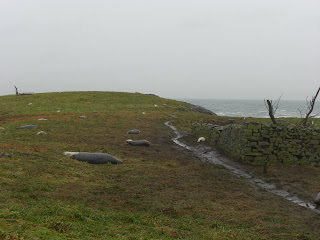 Brownsman seal colony near the pond, starting to 'thin out'
My day started at 4am as I woke to thundering wind blasting the cottage on Brownsman and I opened my eyes wondering what had gone wrong. Wind? Surely not, the forecast was for calm conditions or so I thought. I soon realised that I wasn't dreaming as a storm force gale was lashing the south end of the islands. Oh dear, this is the last thing we needed with just a few days to go and this was very unexpected. However it was a storm and I had to venture down to the jetty to check everything and ensure all was safe from the North Sea, which was a bubbling frenzy. Following the unexpected early start, we now have to start wondering whether we'll actually get off on Saturday...
Regardless of our perils, the seals don't care although its almost the end game for them as well. The north beach of Brownsman is becoming deserted, like many of the Farne seal colonies, as successful cow seals are now mating before returning to the sea to put on valuable weight for the winter. The once white fluffy pups are now moulting into second coats and are well on their way to becoming the next generation of Farne seals. These little wanderers will soon follow their mothers into the sea and face the trials and tribulations of life as a seal and the islands will soon become empty once again. However its still reasonably busy, as pups will continue to be born on the islands throughout December but it'll be just a small handful of late stragglers which will do so.

As for the team, well with just days to go we’re full of busy as there are plenty of reports to write from birds and seals to butterfly's and cetaceans. Its been a great season, as a lot has happened over the course of the past nine months and its almost at an end. As for the door, well we left it open on our early morning raid to the jetty and returned to discover a seal in our bathroom. Remember, please close the door.
Posted by Farnes at 18:49

Oh David you poor people I really thought you were going to have a calm few days for the final stretch . That picture of the two mating looks so elegant - sweet for two large mammals . See a lot happens in 9 months as you say - my little Archie took 9 mths to arrive bless him and he is growing fast and even smiling now - you had better be on the Farnes in a few years because I will be bringing him to see you .
Take care and hope the weather improves and remember CLOSE THE DOOR xx

"A seal in my bathroom" would be a wonderful title for a book of your experiences! Bet it was interesting getting your visitor out of the bathroom...
Hope the storm soon passes and you are able to get everything finished off and closed down. In case you don't get chance to blog again before you leave, safe journey and hope to hear from you again sometime soon.

Likewise, thank you David and everyone involved for the updates and the terrific blog, it's been a joy to see the photos and read the updates and I will miss it a lot.
Safe journey and Merry Christmas!