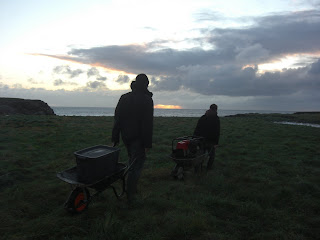 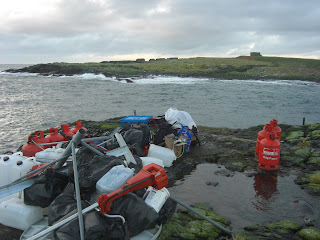 Ready to go - various things to take away 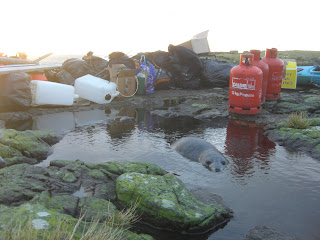 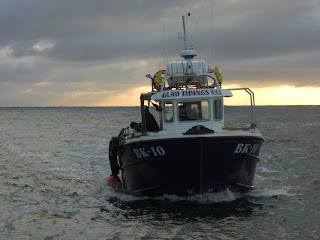 The boat approaches - its time to leave 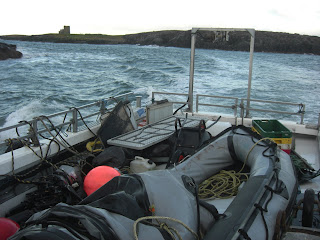 Goodbye Brownsman - on our way westwards to the mainland 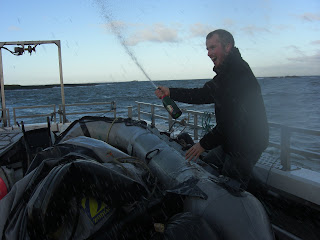 Time to celebrate - me with the 'usual' finish, a bottle of bubbly
Saturday 6th December. It was an early morning start for the team but all was not well. The wind was blowing from an easterly direction which was producing large swell around the islands and that did not bode well for our departure. Surely not, surely not a final cruel twist to our season. With everything cleaned, packed away, fridge-freezer defrosted, food removed, water containers emptied, furniture stored, surely we were not about to be trapped on the day we were due to leave...
However as dawn broke over the horizon, so did the shape of a familiar sight - the boat. Bobby and co had made it, we were heading off and saying goodbye. The boat was fully armed with four boatmen all ready to help the loading and we were going, no mistakes this time. The operation was as swift as ever, as everyone went about loading all the equipment and making sure we departed Brownsman in fine style. So that was it, we were off and just after 10am, the ropes were cast and we departed the island for the last time this year.
Its a sad moment for all concerned, as we were leaving 'home', having been living out here since late March. However I'll be back to fight another year but for some wardens, its the end of an era as contracts have expired and some won't return. This would be a big farewell for those lads as they head for pastures new over the forthcoming months.
However the job was not complete, as we popped the bubbly, celebrated and cheered a great season. We arrived in the small Northumberland fishing village of Seahouses just after 10:30 and we went about unloading, and storing everything for the winter. All the recycling and rubbish were sorted (we don't have bin-men out there!), the Zodiacs dismantled, computers locked away and that was it. The season of 2008 was over. As usual the team had one final night together as we stayed in Seahouses for the evening, catching up with friends and discussing the highs and lows of a great season. Eventually sometime in the small hours (and full of beer) we went to bed, having completed the mission - we were off and welcome to the mainland.
Thanks for every ones kind words and support but stick with me all this week as I'll bring you stories of the season from the wardens who made it to the seals which we counted. Don't go anywhere, I'm not finished just yet...
Posted by Farnes at 17:43

NO BIN MEN !! what is this world coming to David cant get the service nowadays can you !!!! Glad you had a safe journey - knew Bobby wouldnt let you down . Must be really sad for the ones not going back but pleased you will be there next year when I visit - so where do you head for now ?? Hopefully your head wasnt too sore this morning !! I for one wont be going anywhere and will look forward to your news over this coming week . Welcome to the mainland all of you and take care and enjoy yourselves over the coming weeks . xx

Glad you all got off in time for xmas! Give me a shout over the winter, we'll have to catch up for a pint!

I was thinking it was all over, but not yet - goody! Looking forward to your final blogs and news David, and good luck and thank you to everyone involved in the wardens team. You deserve that bubbly!