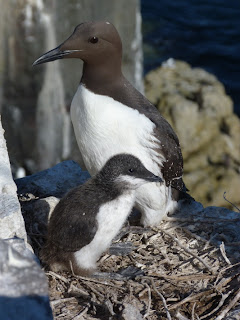 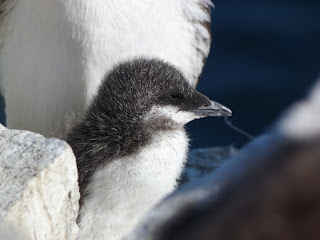 Youngster waiting to go (Will Scott) ﻿


Monday 18th June comments: Guillemots are amazing birds. They nest on the Farnes in their thousands, laying a single egg and incubating it under their feet (Penguin style!). Once hatched, the young chick is raised and then at 20 days old, the chick is called down to the sea and the adult male takes the youngster out into the North Sea where it grows its flight feathers, learns how to fish and discovers what life is like as a Guillemot. It’s an amazing strategy which works- the Farnes increasing population is testament to that.

On calm nights, late in the evening, the first thing that becomes apparent is the noise increase. With both adults and chicks constantly communicating, it is not long before the whistling and jabbering creates an absolute cacophony, echoing off the cliff faces and carrying across the water. This is the pinnacle of activity in the seabird city that is the Farne islands. A month of incubation and a further 20 days of tending to the chick culminate in this spectacular evening event.

The video above gives a snap shot of the first ‘jumplings’ filmed last night by Ciaran and I suspect over the next few weeks, we’ll have many more following. Despite the weather, the Farnes is bouncing back.
Posted by Farnes at 09:08