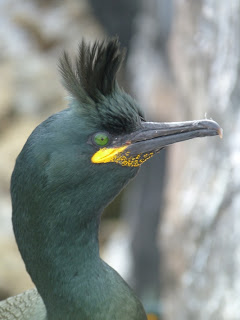 Up close - stunning head of a Shag 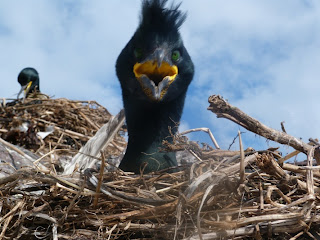 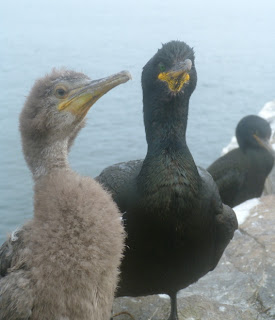 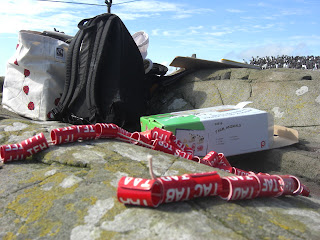 Bird ringing with Shag 'darvics' ready for use 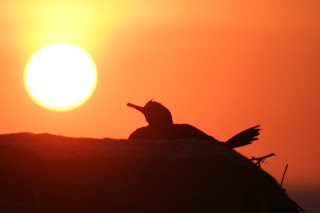 Sunset over the colonies

Tuesday 11th September comments: In the latest series of seabird reviews, we take a closer look at the Shag and the season it experienced on the Farnes this year. The species remains one of the very few which remain around the island all year round as large groups can be seen loafing on several islands throughout the winter months. Following a mild start to spring, the first eggs were discovered on 23 March, matching the previous earliest ever laying dates set in 2003 and 2011. Following this rapid start, a good number of nests with eggs were recorded by the end of March.

As was the case this season, the weather caused issues across the colonies as large young (from the early nesters) were unable to shelter under their parents and succumbed to the elements (especially the rain). Despite this, the ranger staff monitored 344 nests (staff monitored 36% of the population) which produced 356 fledged young. This result gives an overall ‘productivity’ of 1.03 (compared to 1.41 last year). Despite the slight decrease in overall productivity, this years figure was still well above the average levels of ten years ago.

For the fourth consecutive year, the colour ringing study continued with over 100 new birds fitted with ‘darvic rings’; making them easily identifiable as individuals and to allow field observations to identify birds. A pair illustrated some interesting information on the dispersal along the east coast of Britain as a male carrying a red darvic (ringed on the Farnes) paired with a female carrying a yellow darvic (ringed on the Isle of May) and successfully raised young on Staple Island.

In conclusion, Shags had a reasonable season, with the population increasing and steady productivity, something we could only have hoped for considering the weather we had this summer.
Posted by Farnes at 20:27