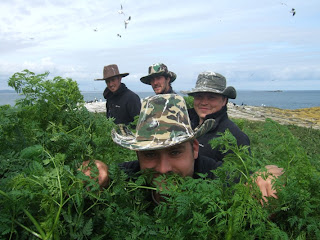 Having a laugh but with some serious work - the lads counting 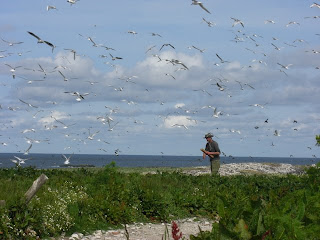 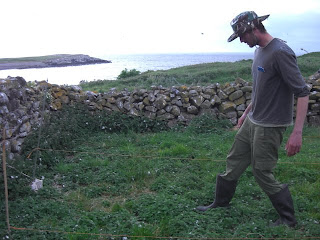 Sunday 7th June comments
The BIG day arrived, nest count on Inner Farne. The team were about to spend all day counting all ground nesting seabirds across the island. Transect lines would have to be placed, full concentration would be required (watching for those eggs!) and the hammer blows from the 1,000+ pairs of Arctic Terns would just have to be tolerated. This was it, no turning back.

As arranged, the Brownsman team covered visitor work in the afternoon (Inner Farne remained open to the public throughout the count) as we don’t count Brownsman until tomorrow. The day went well, the weather maintained itself (despite an early scare from a rain shower) and the Inner Farne team worked hard, counting and roping all the nesting colonies across the island. Everything was counted, from sitting Eiders, to nesting Oystercatchers. No stone was left unturned and finally, some 15 hours later, the count was complete and the job was done.

For the majority of the team, this was a new experience and one they won't forget. The team were shattered and mentally drained having concentrated on not standing on any eggs but despite this, there was a sense of great achievement and huge satisfaction. It was great fun but hard work at the same time. We were there, the one-off count was complete and our population figures for several species is now be known (for Inner Farne at least).

However it wasn’t all finished, as the evening was spent crunching figures (and sorting the weekly cash-up), but otherwise I was in bed at 21:00, exhausted from a hard days work. They don't get any harder out here but it was a great result. My team had done me, themselves and the Farnes proud, but it’s still not over. Tomorrow, we will get up at 6am, we’ve still got several cliff counts to complete and Brownsman to count. It’s never dull out here and it never stops…

much more interesting than the count from the European Elections!

Ah, I remember those days well. Get up at 5.30 for cliff counts, quick breakfast, several hours of visitor work, nest productivity monitoring, counts on other islands plus anything else that needs doing, cook, wash up,bed. All good stuff though and beats an office job any day of the week. Looking forward to hearing all your figures and productivity stuff later in the season-Can the Farnes buck the national trend again and will those Roseates finally just make up their mind and breed?