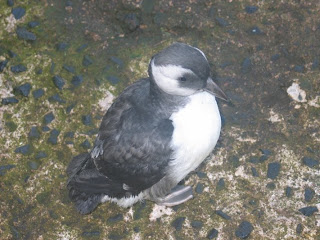 Nothing like an adult: a fledgling Puffin on its way 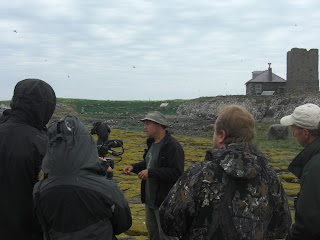 Dr Richard Bevan talking to the media on Brownsman 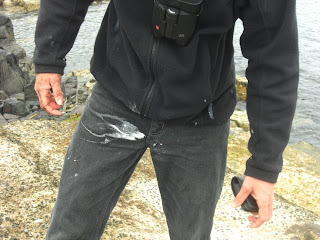 Never work with Puffins - thanks for that
Friday 26th June comments:
This really is it now. The first Puffin chick walked from its burrow, without parents consent and departed. The bird had fledged and now like its other family members, the Guillemots and Razorbills, the Puffins are going. It’s hard to believe this thriving seabird metropolis will soon be empty and everything gone. Over the next four weeks, birds will depart on mass and by early August, the islands will become just that, bare cold islands. The season is heading for a great success story (fingers crossed) and with the first departure of a Puffin chick, its time to say goodbye.

However not everything is going, as Kittiwakes and Shags will linger on until late August and then comes more excitement, it’ll be migration time again! Also the months of August and September can bring other exciting sightings, as its peak cetacean time, so hopefully more Dolphins and a Whale or two on the agenda.

Staying with Puffins, the media descended onto Brownsman today, both local and national, to cover a story which will break next Wednesday (1st July), so brace yourself, more Farnes related press coverage coming your way. However you’ll have to wait for the story to unfold, but its interesting and well worth reading or listening too. As for me, well whilst holding a Puffin in my lap, it decided to leave its mark and let me know what it really thought of me - the joys of working with seabirds!

Butterflies: Plenty of Painted Ladies moving with small numbers of common butterfly’s
Posted by Farnes at 09:11

Oh no suspense what story is about to be told National as well must be big !! - roll on Wednesday . That Puffin chick is so sweet , hoping there will be something left for me to see when I come up !! Nothing like a puffin to tell you what he thought of you I am sure you didnt mind !!!

Waiting with bated breath, will this be national media?

I hope there are still some puffins around Mull week after next, when we go there. My daughter is so desperate to see puffins she's even saying she'd rather see a puffin than an otter!