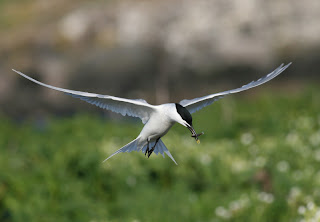 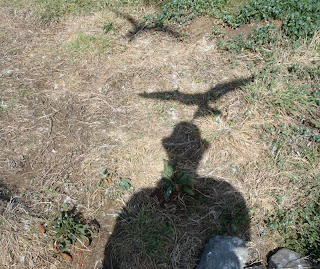 There behind you - Arctic Terns in attack mode
Saturday 13th June Comments:
The busy days continue to come thick and fast on the islands, as the calm sunny weather has returned and visitors have returned in good numbers (not that they’ve not been visiting). Its now eight cliff counts down for both island teams and by Monday morning, we’ll hopefully be celebrating a complete set of ten. The end result will bring us our cliff count figures and the population totals for several species (Guillemots, Razorbills, Shags and Kittiwakes). Gradually everything will come together and the Farne seabird population totals will be revealed in the near-future. As well as population counts, the team are constantly monitoring the seabirds, which will reveal just how well each species has done this year and then we can compare against other North Sea Seabird colonies and previous Farne seasons. The Sandeel situation appears good so far (touch wood) and Snake Pipefish (a problem and concern of recent years) appear to be very few and far between.

One thing which we did receive today, which we’ve been in very short supply this year, was rain! After nearly two months without (the ponds are now dust-bowls), we had a heavy downpour for one hour this afternoon. Rain may be a relief for gardeners, but at this time of year, as small chicks are just hatching, it can be a killer. Exposure can kill a small chick in the matter of an hour or so, so rain isn’t welcome and we could do without much more over the next few weeks. After that, I don’t mind, so long as the seabirds escape the worst of it.

Breeding birds: The first Guillemot ‘jumpling’ has jumped off the cliffs on Inner Farne on the morning of 11th June. It’s the start of the end for the Guillemots, as the youngsters jump from the cliffs to the sea and the parents (mainly the male) will take them to Dogger Bank (middle of the North Sea) where they will grow flight feathers and learn to become independent. The entire population of Guillemots (there is a lot of them!) will be gone from the cliffs of the Farnes by mid-July. Elsewhere its now all go, as most seabirds (apart from Kittiwakes) have young and the number of Arctic Tern young hatching has reached a new high, as hundreds are present on the day. The result is lots of hungry mouths so plenty of fishing by the adults to be done.

Highlights: Marsh Harrier female west yesterday (13th June) represented the second this season and the Farnes 18th record overall. Canada Geese - two skeins of 17 and 45 north - heading to moulting grounds in northern Scotland (yes some do migrant in the UK), Bar-tailed Godwit 10, Knot 30, Roseate Tern 2 adults lingering, Black Tern reported near Brownsman, Swallows – the pair remain on Inner Farne but the half-constructed nest appears to have stopped, have the pair given up?

I'll bet it gets noisy with all the terns screaming, not to mention hazardous! Fingers crossed the rain holds off for your final count and so the chicks get strong enough.

Morning all sounds like things are going well , looks from what you say I might miss the Guillemots then as I will be over with you on 16/17th July and cant wait !!! David just a question is it necessary to book Billys boat beforehand or can it be done on the day ??? Shame about the swallows if they have given up . Lets hope the rain stays off for a bit for you , you have got busy times coming up during July and August with no doubt lots of visitors . Take care of yourselves and keep those hats on !!!!

For trips to the Farnes you can just book on the day - there are four boat compaines running trips to the islands - all four have booking 'huts' on Seahouses Harbour. The first boats sail at 10am. Good luck!

Thanks for reply David - someone had told me that they get very busy so thought I might have to book in advance - if all goes according to plan will be out on the first boat 16th July - so excited , 3 chicks to look after when I get to Loch Garten as well !!!! Will try and sail with Billy as hes my hero !!!