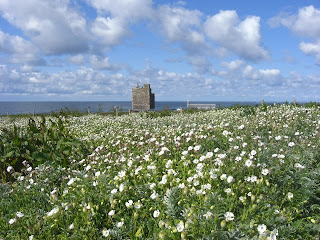 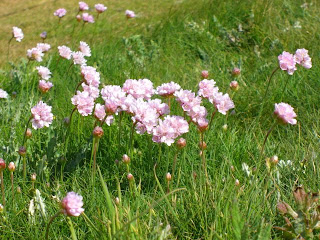 Thrift (also known as sea pink) - th only bit on the islands! 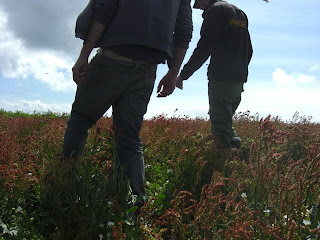 The counting continues into day six
Friday 5th June comments:
It was another morning of counting, but on this occasion, the ground nesting birds of one particular area of Inner Farne. The central meadow which (as the name suggests) is in the centre of the island, contains nesting Arctic and Common Terns along with good numbers of Eider and Black-headed Gulls. The process is simple; we lay transect lines across the meadow and count every nest (as a pair of birds). The main bulk of Inner Farne will be counted tomorrow followed by Brownsman and Staple Island on Monday.

Thereafter we can reach for the abacuses and we’ll have population figures for the islands. The cliff counts are still going and will do so for some time yet, so we’ll not know what’s going on there just yet. Its interesting work and not what I would call a day at the office!

The major highlight of the day came in the form of a small migrating game bird, not often seen by British birders. As myself and Jason were about to undertake more counting on central meadow, I placed my foot in a patch of grass, only to flush a medium sized bird a few feet in the grass. After a brief pause, the bird took flight again, this time heading strongly over the meadow before ditching into an area over the far side of the island. Sadly that was it, no more views (as expected on the islands), but two very happy observers. The bird in question; a Quail, having travelled from wintering grounds in Africa to breed in the UK (they are notorious late arrivals). It represents the first inner group Quail in ten years (since 2nd June 1999) as Brownsman has dominated records since (seven between 2000-2008).

As for tomorrow, it’s a BIG BIG day. We’ll be up at 5am counting all the ground nesting birds on Inner Farne for what is one of the longest, hardest but yet rewarding days in the Farnes calendar. Watch this space, my predictions for Eider numbers down but Arctic Tern numbers up, but then again, what do I know…

Good luck with the count today then - it's pouring with rain, cold and windy here...

and an ice cream van just came past!