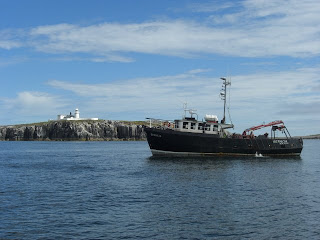 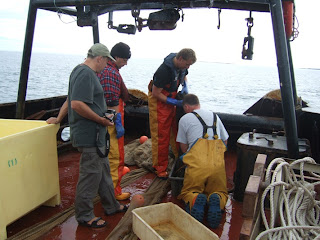 Sorting out the trawl nets 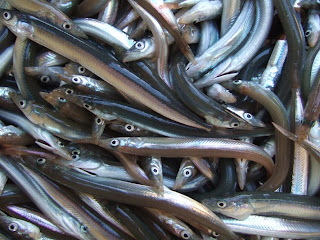 The catch: its good news, Sandeels galore
Tuesday 23rd June comments:
Days come thick and fast on the Farnes in June and the fantastic weather brings out lots of visitors, its great for the seabirds and the team don’t complain either (its BQ weather after all!!). Today was another exciting day, as the research vessel Bernicia arrived on the islands for its annual trawl around the islands. The boat is part of the Farnes Marine Research group, who, along with the wardens on the islands, map the seabed around the islands and trawl for samples of Sandeels, to see what is actually happening below the waves.

As usual, two wardens (Davy and Joe), accompanied the boat to assist with the trawl for the day and the results were excellent. The number of Sandeels being trawled up was good (better than the previous few years) and Snake Pipe-Fish (a problematic species) was almost non-existence.

Snake Pipe-fish were classified as very rare in Farnes waters up until 2003 (only three records existed until this time). Thereafter we saw a huge boom and to put it into context, just a single trawl from around the islands two years ago produced 500+ Snake Pipe Fish - and that was just in ONE trawl. However they appear to have gone as quick as they arrived, as Snake Pipe-fish are now becoming scarce.

Breeding birds: its ALL go, as the seabird colony has now reached its peak as chicks grow bigger by the day and some even fledge – we’ve now got Razorbills and Guillemots leaving in their droves. The Tern chicks grow ever bigger by the day and it’ll only be a matter of a week or two before they are flying. Even the passerine birds are getting in-on the act as Pied Wagtail young fledged last night (second brood) although our Swallows appear to have given up trying.

Cetaceans: Porpoise three sighted by Longstone Lighthouse with another two in Inner Sound (between Seahouses and the islands), so keep your eyes open if your visiting!
Posted by Farnes at 11:23

Okay now this is a silly question maybe but what happens to the sandeels you trawl up are they just put back or ?? Hope you are maybe having a BBQ tonight certainly been a lovely day here in Hampshire today . Have fun .

The Sandeels are returned (those which are alive) and those which are dead, are brought back and fed to Tern chicks - supplementary feeding!! Nothing is wasted.

Thanks for reply David that was what I thought but wasnt sure . Bet the Parent terns said thank you - all helps to feed those hungry chicks .