The trouble with Arctic's 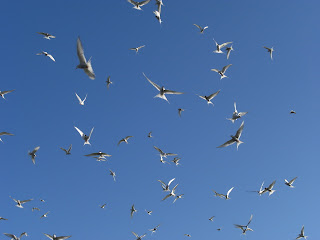 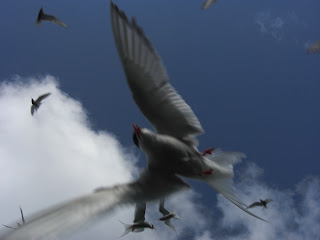 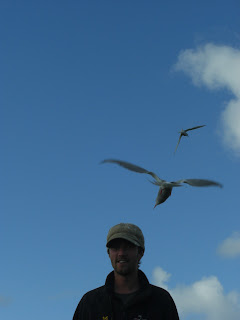 Warden Jason Moss meets one of our Arctic Terns 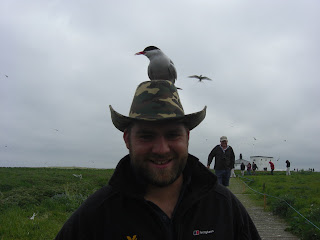 A view with a difference; Arctic Tern on warden Adam Hicks hat

Friday 5th June comments:
For those unfamiliar with one of the Farnes most famous nesting seabirds, let me introduce the Arctic Tern. These magical birds arrive in Farnes waters in mid-April, breed on the islands during the summer months before heading south for the winter, as far as the pack ice of the Antarctic. One of our birds even has the distinction of being found in Australia, after leaving the Farnes 100 days before - now that is some going!! These birds are incredible and deserve all the plaudits they receive, but it’s not about the receiving, it’s about the giving when it comes to these aggressive nesters.

As anyone who has set foot on Inner Farne at this time of year will tell you, you’ll be greeted by a peck, followed by another, and another and another. Arctic Terns have being nesting around the main visitor trail (beside the Chapel and the courtyard) for the past thirty years. Despite the daily disturbance from visitors, the birds actually do very well, as predatory large Gulls (which would eat their eggs and chicks), do not enter areas where people will stand, so it works as a kind of protection racket. However that doesn’t stop them from attacking you!

Despite their size (compared to us), the birds attack, and attack hard, drawing blood on those unsuspecting visitors who arrive without hats at this time of year. Alfred Hitchcock would be proud. It’s surprising when you mention this to people, as they laugh it off presuming were only joking, but these Terns don’t joke. So if you do visit over the next month or so, enjoy and appreciate these amazing aerial masters, but be warned, the guard Terns do bite.

Breeding birds: Oystercatcher – the first chicks have hatched so join the ‘chick club’ – not many to go, just Arctic Tern, Common Tern, Fulmar and Kittiwake! The cliff count this morning was cancelled due to a poor sea state, so fingers crossed for tomorrow.

Butterflies: Still general quiet although Painted Ladies 5 and a Small White
Posted by Farnes at 22:40

Great pics again I love the one on Adams hat - now that is one thing I havent packed so off to make sure I put one in the van !!! hadnt thought of it . Hope you are all having fair weather and have lots of visitors this weekend - take care everyone .

Did that bird land on the hat entirely naturally or did you bait the hat with something, perchance?