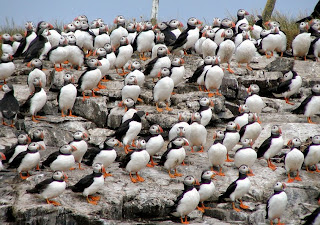 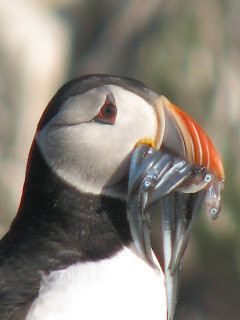 A good crop of Sandeels

Sunday 28th June comments:
Life’s not easy is it? Just ask a Puffin chick (also know as a Pufflin). It spends forty days down a nesting burrow, never seeing daylight and growing up on a diet of Sandeels. Eventually when it’s ready to go, the chick will leave under the cover of darkness and walk down to the sea, before swimming out into the North Sea, away from all predators and survive on the North Sea, returning three years later to breed (hopefully). Simple? Well not quite…

Not everything goes according to plan. Every year on the islands, we have a small number which leave the burrows and set off on their journey to the sea under the cover of darkness. However, put a 14th century Chapel, a 15th century Pele Tower and a visitor centre in the way and the end result is that we normally have several fledged chicks scampering around the buildings, discovered during the morning cleans-ups. If their really lucky young Pufflins, they’ll be found in the public toilets....

So this is where yesterday’s story begins – we found a scampering Puffin chick in the toilets having lost its way in the dark the previous evening. So operation ‘Release the Puffin’ swung into action and due to the risk of predation, we kept the bird with us for the day and then we descended onto the jetty as light faded. We released the youngster (who was delighted to be out) onto the jetty but he wasn’t in a hurry. After a few wing flaps and stretches, he eventually walked (with some trepidation) to the edge of the jetty. Plop, he was then in – the North Sea for the first time in its life. The bird began to swim strongly east away from the islands and almost immediately started diving (its incredible behaviour from something which had never seen water until a few moments earlier).

It was a great success story and we’ll have many more like it over the next few weeks – the Puffins are doing well and this little chap is just one of the first of many. The season is going well, fingers crossed for a really good one...

Butterflies: Painted Ladies 60+ moved through the islands yesterday – a noticeable invasion whilst there was a general increase in Red Admirals
Moths: Several hundred Silver Y's moving through - another migrant on the charge
Posted by Farnes at 08:54

What a lucky little puffin to be rescued by superhero wardens :D well done all of you!


The brood of great tits in my garden nest box fledged yesterday, and there seem to be young birds everywhere - a fact the local sparrowhawk seems to appreciate :(

A big Aaaaaaaah and what a lucky Pufflin , amazing how they know exactly what they have to do when they hit the water - wonder if you will find any more , what a great job you all have . Hot and Humid in Hampshire today wonder what the weather will be like next week when I am on my travels !!! getting close now and although I am taking a netbook will I be able to read your blog I do hope so .